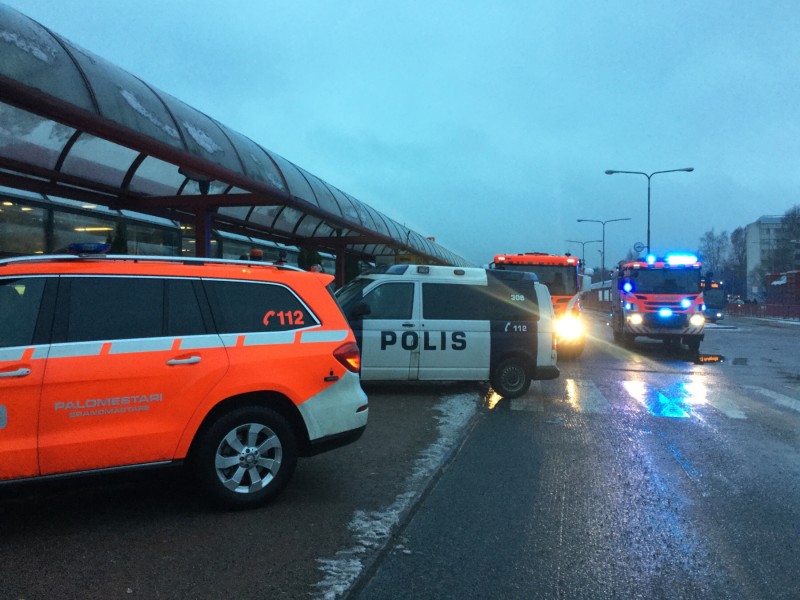 I didn’t set my alarm because I had no teaching this morning. I woke at 5:00 when the snowplough toured the area and then went back to sleep.

I woke again at 7:30, had breakfast, and left. Naa was still asleep because she is working an afternoon and evening shift this week. I was later at the bus stop than usual and waited ten minutes for the 93. While I was waiting two ambulances raced past, lights and sirens on, followed by two fire engines.

I have got off the bus at Itäkeskus and it is obvious where the emergency vehicles were going. The station is open but the platform is closed and no trains are running in either direction. I wait until there is an announcement to say that somebody is under a train and then I search for a bus. There is nothing I can do except get out of the way. Paramedics are running in as I leave.

I get onto the 58 which then fills with as many people as can possibly fit in it. It drives past Herttoniemi where hundreds of people are waiting for busses. Finally we get to Kalasatama, where I manage to get off, but only because a large group get off here. I walk from Kalasatama to Arcada and get there sometime after 9:00.

I will spend the morning getting ready to prepare tomorrow’s sessions and getting stopped every time I almost start. My laptop will insist on restarting, because of updates, and then insist on restarting again, because of updates. Evernote will then refuse to update because Flash has, in one way or another, fucked the whole system up. It has left the system under the impression that an update is in progress.

I will restart for a third time and update Evernote before opening anything else. It will work.

I will have a meeting at 12:00 about a possible overarching theme for teaching next year. I will then have lunch in eight minutes before another meeting which will involve watching a movie of Dutch theatre workers giving and receiving feedback, using the DasArt Feedback Method. After this I will have another meeting that involves determining whether or not we want an online film archive, and if so how.

At 17:00 I will walk back to Kalasatama for a Pixelache boar meeting, which will go through the finances and the new financial system. I will suggest a Pixelache Downloads project and offer to curate or edit it, and it will be met with approval and maybe mild excitement.

As I leave I will check the net and see from YLE that someone died at Itäkeskus this morning. I hope it was an accident.