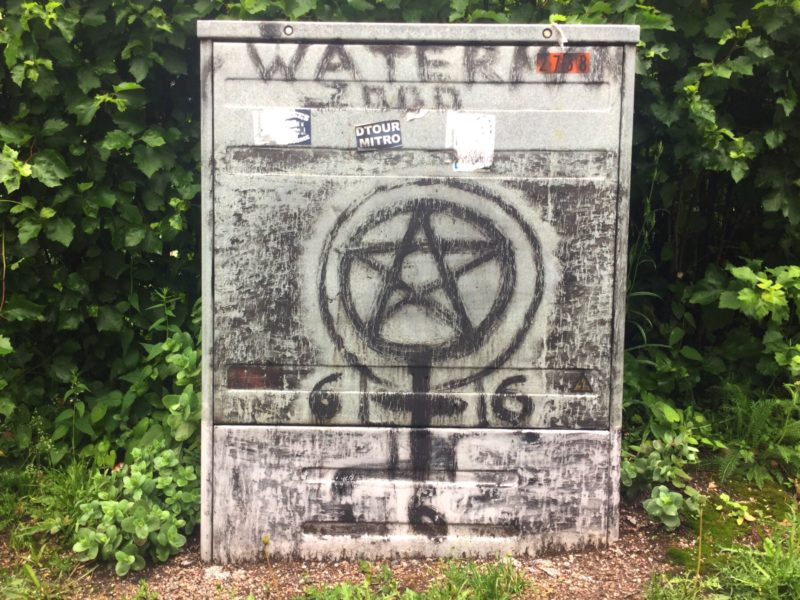 Today I slept in. I didn’t wake up until 8:20, and when I did I felt genuinely refreshed.

I am cycling to Puotila station and, being on no particular schedule, I stop to look at some graffiti that caught my eye the other day. It looks as though it is for an anarchist band.

When I get to Arcada Monica will be there, hard at work. The rest of the room will be empty. This will suit me fine as I want to do some semi-official work this week that takes advantage of the big screen. Specifically I want to finish my book chapter and get Community, Art and the State ready for publication as an ebook. This will turn out to pose some hidden technical challenges that I had not expected. I will read about some of the issues and then put it aside in favour of completing all the revisions for the chapter I have written for Alison and Gerri’s book on the history of community arts.

This will take most of the rest of the day as I have to identify quotations I have used and pin them down in terms of the page of the book they come from. In doing this I will correct one egregious mistake. John Perry Barlow did not say “information wants to be free”. It was Stewart Brand: and what’s more, I now have the book title and page number to prove it.

At 17:00 I will join twenty or so other people at Sinne Gallery in Iso-Robertinkatu to watch Benjamin Bratton talk about The Stack To Come, his latest book. This will be a strange experience.

I will take a seat on the front row and sit about two and a half metres away from him. He will use a microphone running through a soundboard into two speakers and (accidentally as it will turn out) this set up will give an unusual level of echo, interspersed with slight feedback. He will sometimes move the microphone away from his mouth and then back again, rapidly varying both the volume and the degree of echo. I will thus be in the unusual position of listening to someone almost within touching distance as though through a very bad Skype call. I will catch every other phrase and sometimes they will fold back on each other. I will contemplate the possibility of doing this deliberately as a performance. I will imagine a second speaker using a similar facility talking at the same time from somewhere behind me.

Later he will abandon the microphone and pace up and down talking. I will realise that he gulps the end of his sentences, but not always, so the effect is still disquieting. He will also talk in a way that leaves everyone uncertain about what he is talking about and what his position is in regard to whatever he is talking about.

If I hear him correctly he will talk at one point about using a biological template, “or you might want to call it a biophenomenological template”. I might indeed – if I had any reason to believe that the word actually exists.