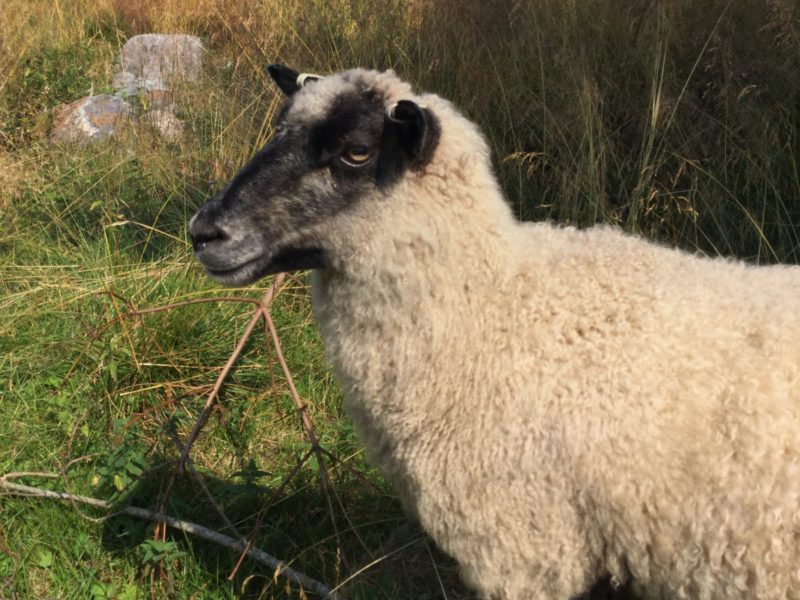 We had been promised a heatwave at the end of last week and it has arrived as promised. Today is supposed to be the hottest day of the year. We got up and Naa slept until almost noon.

I carried on reading Susan Blackmore’s Consciousness: an introduction and Irma touched up the paint on some of the walls of the house and sauna. When Naa finally woke up we abandoned the idea of breakfast and moved straight into lunch.

It is about 30 degrees and the sun is coming straight down through cloudless sky. It is too hot to do much at all. We have had four sheep in the field next to us all summer and they have got into the habit of following us as we walk up and down. At the moment they are baa-ing in unison and I am deciding to find something to feed them. Irma suggest I cut some of the bamboo and I do. I climb over the fence and one of them walks away from the leaves and stands by me. I photograph her.

Later I ask Camilla why they have been there away from the other sheep and she says that it is because they are white. She wants to breed more sheep with white wool and so she is keeping them separate. Since they have a huge field and we feed them maple whenever we prune a tree and bamboo whenever we feel like it, they are having a good deal.

Irma will make chicken burgers for dinner and after that she and Naa will set off for Borgå where Naa will get a bus back to Helsinki. She is working again tomorrow.