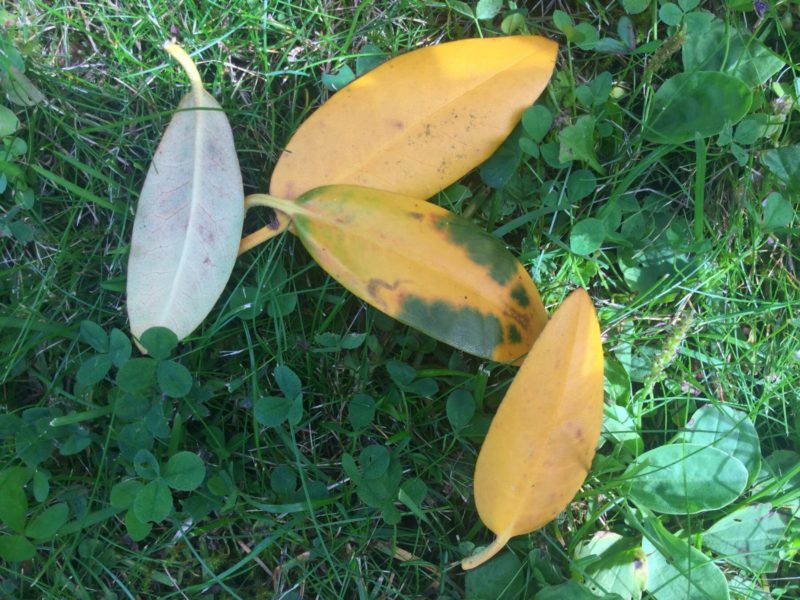 I spent the early part of this morning writing the introduction to a paper called Convivial Mechanics, which I am hoping will have a lot of functions, including being presented in Riga at the end of September and forming the backbone for a grant application to Kone. I spent the latter half of the morning on Skype with Samir in conversation about this, and the companion paper that he is writing.

It is early afternoon. I am in the garden pulling the dead leaves from a rhododendron bush. I can tell they are dead because they are a golden yellow. If they are green, I have been told, they are not dead. A few of the leaves have fallen out of my hands and made the kind of pattern that makes you think “I may as well photograph that”. And so I do.

In the later afternoon I will get ahead with some of the Arcada work that needs doing before the students arrive, including checking the situation with the online course that begins at noon next Monday. I will answer some emails, including one from Alison Jeffers about my interview for her book. I will correct a quotation in which I appear to be saying the exact opposite of what I contend I meant.

I will also do some ironing so that nobody can accuse me of sitting down all day, least of all the muscles in my lower back.
In the evening I will go for a long walk which, this time, will include wandering around Itis for some time. I will notice that it is months since I have done this. I will also notice that not much has changed.