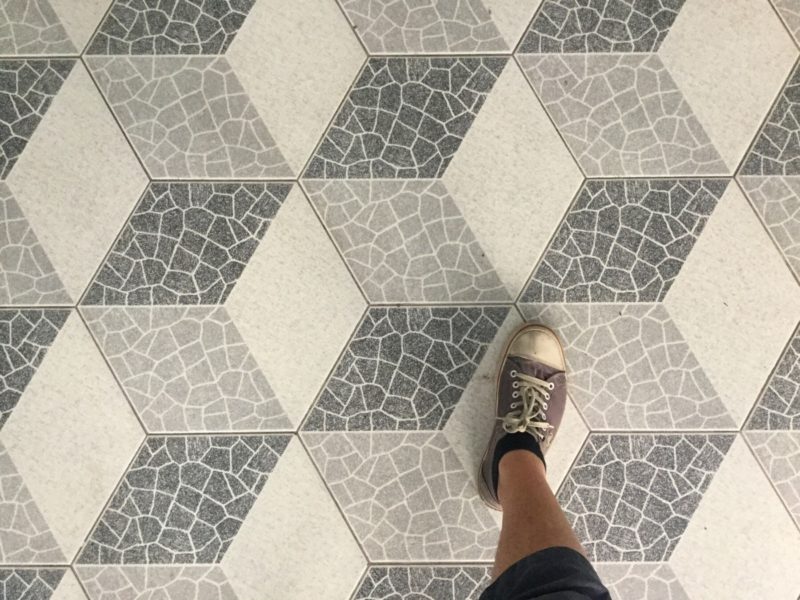 Summer continues and so I left the house in shorts, convinced that this time last year I wore autumn clothes. I cycled to Puotila and finished this week’s New Scientist on the metro.

I spent the early part of the morning adding to the texts for the Convivial Mechanics project, and the later part of the morning in a meeting with Fred and Janne. We three form the membership of a working party looking at how best to upgrade our admissions procedure. We talked and agreed on some things and agreed to disagree on others. We decided to meet again, but decided not to decide when we will next meet.

Then I left for a meeting in Hakaniemi. I arrived at Temporary ten minutes late but I had sent a message to Ilpo in Slack so nobody minded. Standing in the middle of the meeting space and looking down, I realise that I am in a Q-Bert space from the 1980s. I like the effect. I cannot decide whether I should take a photograph showing both feet, one foot, or no feet. I take all three, knowing that I have just postponed the problem until later when I come to decide which photograph to upload.

Ags says something to me while my feet take all my attention so I miss what she says. I sit down and the three of us start discussing the agenda that we set for ourselves last Friday. Andrew joins us and the meeting proceeds down a circuitous road. At 14:00 both Ilpo and I will need to leave so we will declare the meeting ended. Ags will continue writing the proposal that we have outlined, and I will head out into the sunshine.

On the way back to the metro I will pass Black&White records and drop in. I will remember that I saw an extremely interesting re-release in Record Collector and eventually remember the title: Farewell Aldebaran. I will go to the desk and ask about it, and then order it.

By 15:15 I will find myself sitting at my desk at Arcada waiting for a meeting with Liisa. We will lock ourselves in a room and plan an event for next May. Finally we will turn it into a grant application and I will promise to talk with Tomas about it tomorrow morning.

When I get to Puotila I will cycle to Naa’s apartment where we will practise maths for two and a half hours as part of the preparation for her next entrance examination, which will happen in October. She knows more maths than she thinks she does, and tonight she will not only understand the answers as I explain them, she will also point out that, under the dressing, every question has the same features. Every question involves aligning two different scales (milligrams and grams for example) by sliding the decimal point up or down.

I will cycle home before it gets dark for an unexpected supper of stilton and carrot soup.