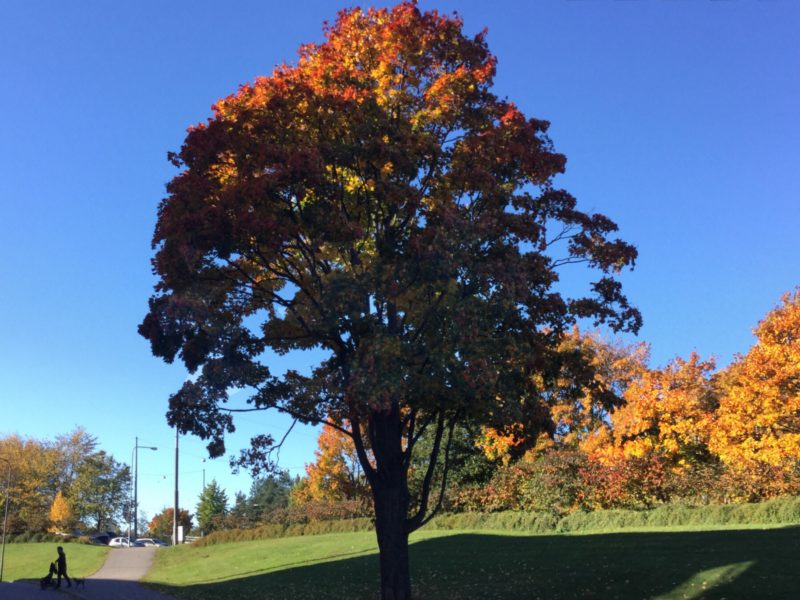 As I left the house I was overwhelmed with the reds and oranges of autumn in Finland; colours that simply didn’t show up on the spectrum in Riga (as they don’t show up in an English autumn).

I spent the morning catching up on small bits of administration, answering student mail, responding to requests, and preparing for my next block of teaching which starts tomorrow morning. I also discussed the state of my Kone application with Nathalie who commiserated. My feeling about it, which probably counts for nothing: I had no time to polish it and I can think of at least one piece of information that I should have included and didn’t. It may get funding but probably won’t. In that case I will blame the application and not the underlying project (which people applauded when I explained it in Riga).

I need to look up and walk, and I need to buy something for lunch, and so I walk to S-Market to get bread, cheese and an avocado. On the return trip I notice all the colours of autumn again and I spot the big tree that I photographed regularly several years ago. I photograph it again because the yellows, oranges and reds look irresistible.

In the afternoon I will attend a Media Management team meeting at which Mats will try to persuade me to go to Tallinn for a conference in November. Eventually we will decide that two of us should go and Liisa will get nominated as the second person. Eventually we will both say yes.

I will go straight to Naa’s from work for another maths session. By now she seems to know more than enough to get through the test. All I will really do is try to boost her confidence in her own abilities.

When I get home I will fail to spot the cat anywhere. I will vacuum clean, wipe surfaces and then spend an hour in the garden raking up the first major pile of autumn leaves. Sunshine will still not appear. Eventually he will arrive just before Irma. His collar will be almost ripped off and stretched around his front paw. He has obviously got himself trapped in something and spent a long time trying to free himself.