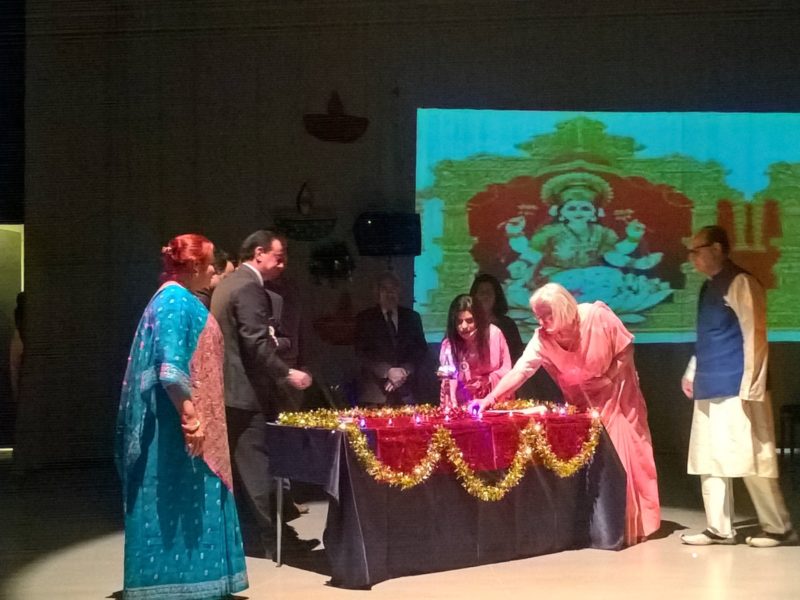 No alcohol and an early night meant that we sprang up this morning and started household tasks without pausing for breath.

I went for a short walk and regretted it almost immediately, as the temperature had dropped to almost freezing point and my clothes did not reflect this. I walked very briskly around the block and came in ready to wipe floors and vacuum clean.

After brunch we worked in the garden, in appropriately thick clothing, for several hours. Since I had last raked a whole tree had shed its leaves at the back of the house, and the trees at the front had joined in. I cleared the whole garden and filled our composter.

We then went in to get dressed, and by dressed I mean formally dressed. Several weeks ago we bought tickets for a Diwali celebration organised by the Finnish-Indian Association, and it starts at 16:00 this afternoon.

Irma downloaded an app called HereWeGo on her phone and we set off. The app directed us and it worked perfectly. We laughed all the way there at the voice. I kept wanting to see if we could use different voices but Irma, quite wisely, didn’t want to fiddle with it until we got there.

The nice lady in the app told us that “you have arrived at your destination” and we got out. We had indeed. We entered the building, bought lottery tickets and I ate mini samosas while Irma had henna paintings done on her hands.

The evening programme started fashionably late, Indian style, and we found seats in the auditorium. We can see the invited dignitaries performing a modern version of lighting candles, which (for safety reasons) involves switching on LED lamps. Among those onstage we can see the Indian Ambassador, the Malaysian Ambassador, members of the Indian Embassy, members of the sponsoring organisations, and the chair of the Finnish-Indian Assocation.

When this finishes then three and a half hours of Indian dancing, singing, and storytelling will begin. Children will jump around. The boys next to me will play a mobile game with the sound at maximum volume. Adults will climb over us looking for coats that have gone missing. Performers will include an extremely good Sami yoiker, members of Finnish and Russian dance schools, and some genuine Indian performers.

Afterwards we will have huge plates of Indian food that will take me straight back to Kerala.

The nice lady from HereWeGo will ensure we get home safely, although she will get confused when we take a detour to pick up Naa’s laundry