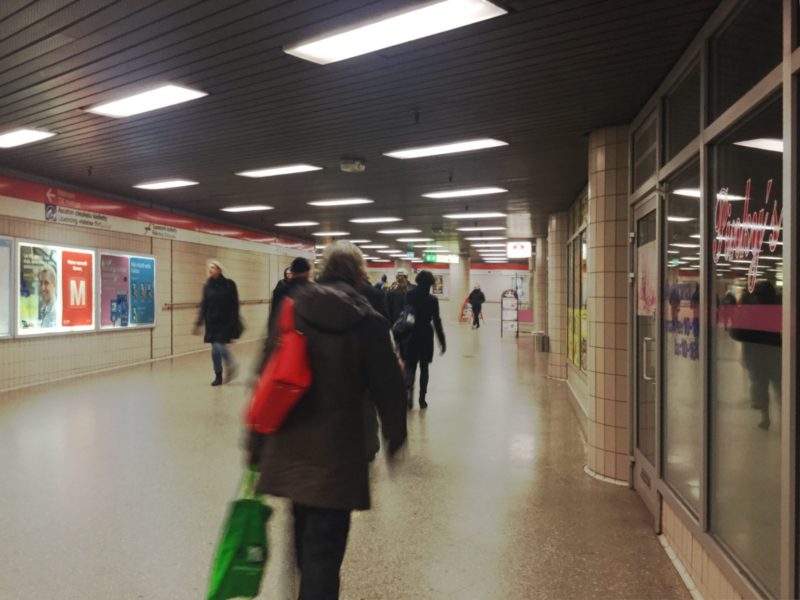 Last night the weather man, Pekka Puota no less, told us that we would face a major snowstorm today, so I went and put my bike in the shed. This morning I looked out of the window at a faint white powder covering some of the garden. I walked to the bus stop and just caught a bus. The doors of the bus stuck a few stops on and we all leapt out of the bus and onto the 54 behind us. I just caught a metro by leaping on at the front, before realising that I could walk all the way down it, which I did since I wanted to get off from the rear.

I had caught the all-new metro.

I heard a classical quartet busking in the metro corridor as I came up the escalators and I got my iPad out to photograph them. In the event I find the passengers more interesting and I use a whole roll of imaginary film photographing them walking in and out of the station. I listen to live baroque music as I do this.

I will spend the first ninety minutes of the morning changing my book chapter in response to Nathalie’s editing. This will include an instruction to reformat the references. I protest that nobody had specified a format, and Arcada’s publications guidelines simply say to use any recognised format. We will settle on the Harvard format after a bit of argy-bargy, and I will spend another thirty minutes changing the references so that look like this instead of like that.

I will have two tutorials in the afternoon. I will cancel the second one after three minutes in exasperation. I had asked for an executive summary of the arguments in the thesis and (for the second time in a row) got an explanation about why the writing hadn’t happened. I will stop the explanation in midflow and suggest that we meet when it has, before leaving the room.

Then Liisa and I will start talking about the meeting in Tallinn in a couple of weeks, I will talk about Bryan’s timetable, and Jutta will point out that the snow has started to arrive. Looking out of the window at the whiteness, and the uniform grey sky, I will have to agree.

Irma will work late again tonight and I will arrive home to find the drive and garden fifteen centimetres deep in snow. I will check the weather forecast, note that the temperature will hang around freezing for the next week, and then work outside about an hour and a half before the snow freezes into piles that nothing will shift. Tommi and I will nod to each other as we do snow work in the semi-dark.

After this and some vacuum cleaning I will watch episode five of Westworld, which will continue to introduce new plot lines. I will count fourteen main characters and at least seven identifiable narrative arcs. It very definitely does resemble the early series of Lost in its structure, but not at all in its main concerns.

Westworld seems to want to explore “what it is like to be” a person, and that I find very interesting.