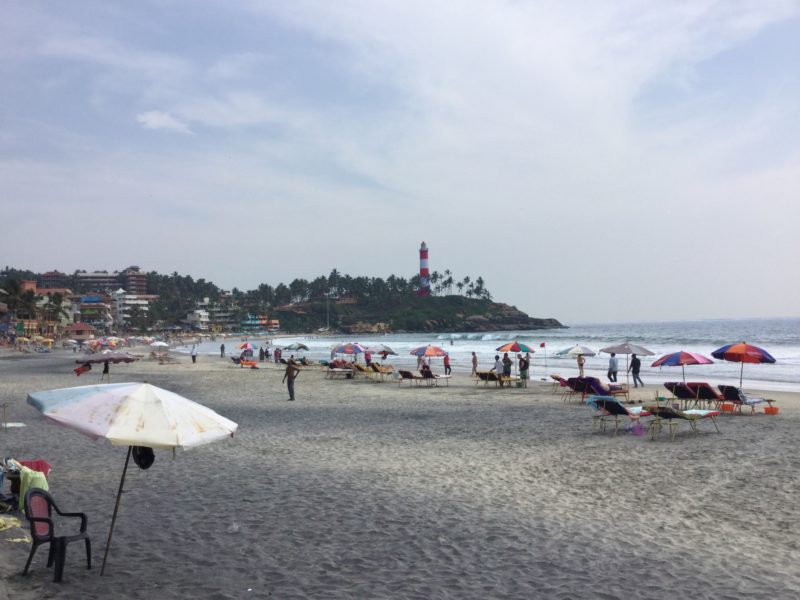 Clouds filled the morning sky and it felt like rain. Nonetheless we did two more loads of laundry and, lo and behold, the sky cleared before the second lot had even got itself pegged.

At midday Anil arrived in his rickshaw and we left for the beach. After about 200 metres he stopped for a tiny puppy lying in the road. It jumped up but he leaped out and caught it. Naa asked if she could hold it and off we went.

At the beach Naa and Irma take turns holding the puppy while I walk along looking for an interesting way to photograph the beach. The person holding the dog gets stopped every ten metres by someone going “Ooooooooh!” We pass the point where Hawah Beach becomes Lighthouse Beach and I give up. I photograph the lighthouse exactly the same way everyone does.

At Leo, Preema, who does some of the massages for Hari, falls in love with the puppy, who has now officially become Elvis Kelly. He gets a wash, some milk, and a lot of advice. People take it in turns to pull nits out of his fur.

I will have a lemon ginger soda and a full massage and then Irma will have a foot massage. Hari will turn up and give us step by step instructions for cleaning Elvis, who now has a middle name: Happy or Headcount, depending who you ask.

To my delight the rickshaw from the beach will choose to go the whole length of K.S. Road. The ride will not turn out as easy or smooth as I predicted, but it will prove possible (and faster than the usual way). The driver will arrive at the house cursing and I will realise that he had made a mistake not a choice. We will tell him about the alternative route and he will not know whether to curse us for not telling him earlier or thank us for saving him from another trip along K.S. Road.

At home the girls will wash Elvis thoroughly with diluted Dettol and he will swim energetically around the sink in an effort to escape them.

He will sleep in Irma’s room.