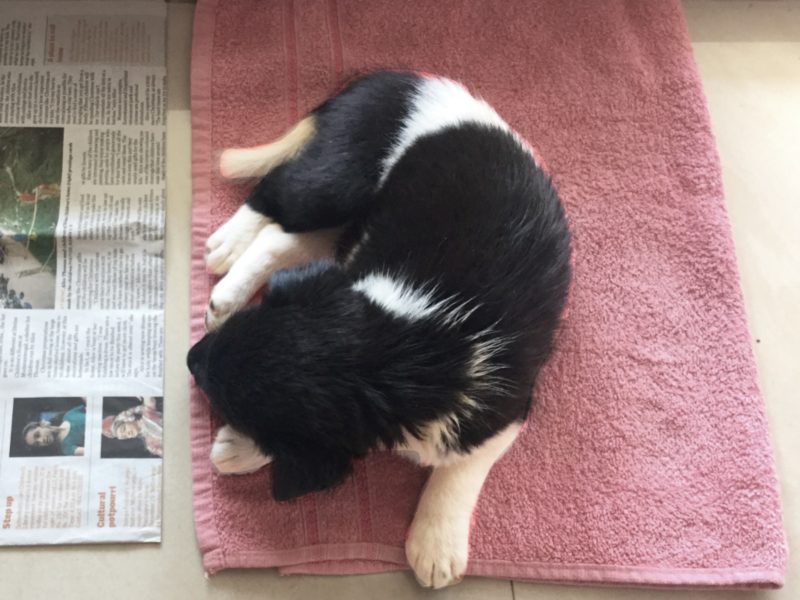 We got up earlier than usual because Elvis had woken Irma every two hours, and woken up properly about 8:00. After showers, laundry and breakfast we tried to find out if, and how, we could get him to Helsinki. The answers seemed to suggest that we could only do it after he had turned five months old.

He would need a microchip, followed by an anti-rabies vaccine (which he could have no earlier than four months), followed by a one month wait for a follow-up blood test. If he passed that, and we had all the documentation, he could enter Finland.

Now Irma has gone by rickshaw to Kovalam Junction to get dog supplies. Naa has played with Elvis in the garden, where he became very active (presumably because, until yesterday, he had only ever known soil and plants), and now he has settled down for a few moments’ sleep. He looks very small lying next to a folded newspaper. He seems to have decided to accept his sudden change of lifestyle because he now lies down completely relaxed and content, without staying alert or worrying about noises. I guess he might sleep much longer tonight.

When Irma gets back he will have another Dettol bath, followed by a thorough shampooing, after which he will curl up happily on her lap.

At 15:30 we will take a rickshaw to the beach and return the towel we borrowed yesterday, washed and dried, to Leo. We will eat there: I will have fish masala with coconut rice; Irma will have chicken and chips; and Naa will have fish fingers. We will all have butter naan, dripping with butter.

The ride back will take an exceptionally long time because the New Year revellers have already started arriving in buses, coaches, taxis and cars. Even Indian motorcyclists will find it impossible to locate a space between vehicles large enough to slip through.