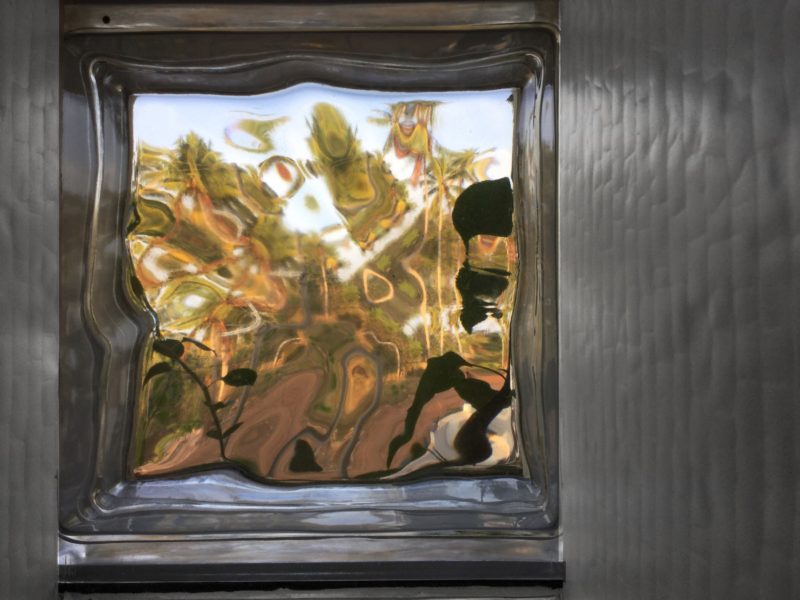 The night passed noisily. The temple and various local parties all did their best to wake up their various gods and remind them that a new year had started. We got up early and, in the middle distance, we could hear some people still concerned their gods might not have heard them.

The temple has the highlight of it festival today and as we ate breakfast big buses carrying yellow flags started arriving, bringing with them the noises of excited chatter and celebration.

We had not drunk very much last night, but we had sat on the roof watching the fireworks until 00:30 and then gone downstairs for a final celebration. We therefore felt a slow day had its advantages.

After eating breakfast I spend a long time in the shower. I notice the view of the end of K.S. Road through the thick shaped glass blocks. I dry myself, wait for a motorbike to pass, and photograph the result. I will take three pictures, each making a different pattern in the glass, and ask the others which they prefer. Nobody will make a decision so I will use this one.

Irma will do laundry, we will sit on the balcony, and Naa will play with Elvis. He has developed and grown noticeably in the past four days. He has started to play and to jump around. He has also learned to go outside to pee, and to howl if he wants to go out and can’t.

At 17:00 Anib, Asha and Paru will arrive for the barbecue Anib has promised. As always the food will taste amazing. Anib will cook pork and spare ribs, two kinds of fish, calamari, giant prawns, and more. Everyone will fill up before he even starts the corn and the vegetable skewers.

Irma will introduce Paru to Afrikan Tähti and she will promptly beat Naa in two games. Anib and I will talk about the fall in the water level in all the local ex-quarry pits. It will have little or nothing to do with a lack of rainfall, as Naa and I had surmised. The neighbours have decided to sell their water, which explains all the water tankers that go up and down the road; and Anib gives his to the temple, who have started using much more than in the past. They now have thirty cows and a huge vegetable garden.

By the time we all say goodbye everyone will have fallen in love with Elvis.