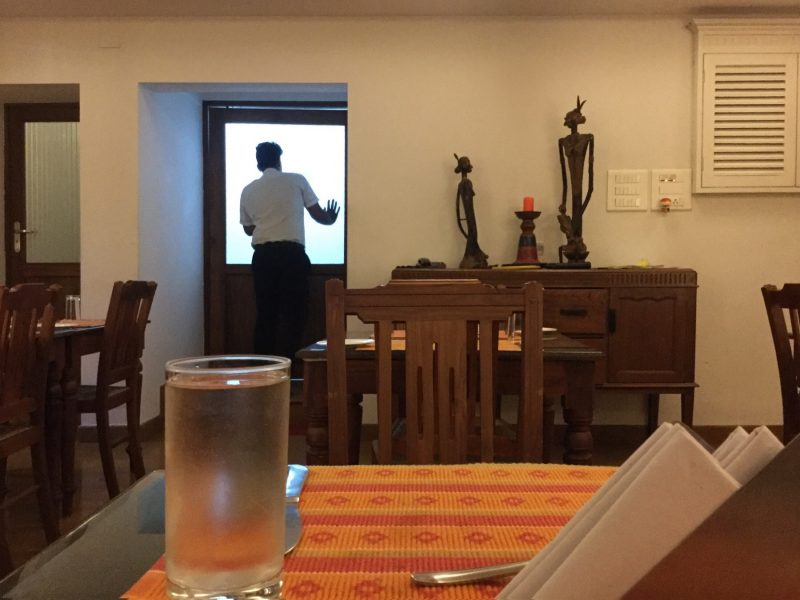 We landed in Mumbai at about 5:00. When we got through security we noticed that the domestic airport contained almost nobody. The airport seemed tiny, with about ten small shops and, up some steps, an empty lounge.

We showed our Diners Club cards and they apologised for having to charge us 2 rupees each. We had a long layover so we sat here, tired and disorientated, for about five hours. At some point in this, Irma felt faint, went to the bathroom, and returned having lost about two litres of blood in a huge and spontaneous nosebleed. Fortunately we had plenty of time; and a couple of hours and a lot of fruit juice later, nobody remembered anybody feeling faint.

We had seats in the extra-large front row and spent most of the flight asleep, or at least with our eyes closed.

A man stood waiting for us at the airport with a big sign saying Irma Sippola, and drove us for an hour to Tissa’s Inn. We arrived at about 14:00, had a welcome fruit juice, got shown our room, climbed into our beds, and fell immediately asleep.

We woke up at 20:00 and decided to have dinner. Washed, but still in no particular place at no particular time, I sit at a table at the Jackfruit Tree. I photograph what I see. Later I will look round and see some intricate wall hangings.

I have Trio Fish, their signature dish followed by fried ice-cream, which I never expected to find anywhere. Irma has chicken coconut roast and two scoops of normal ice-cream. We wash this down with a litre of Kinley packaged water.

Thirty minutes later we will have returned to Room 5, brushed our teeth, and climbed back into our beds. Thirty three minutes later I will fall deep asleep.