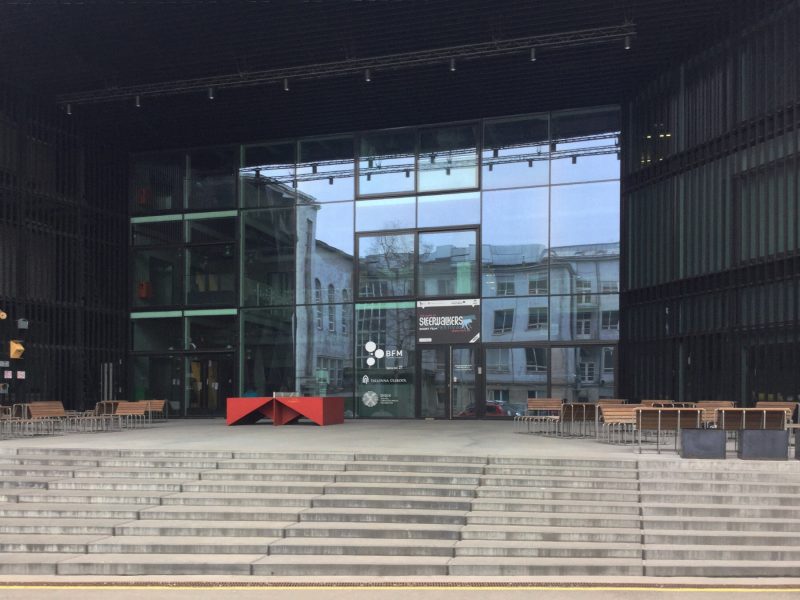 Irma had a long and busy day today, and I had to get a boat to Tallinn, so she got up first. She woke me before she left singing the praises of snow. I looked out of the window to see heavy snow falling on wet ground. To my great delight the wind conspired to make it fall at 45 degrees.

I had had an SMS message from Tallink telling me that the tram would not work this morning and I would have to get the replacement bus, the 9X. I got up, had breakfast, put Sunshine in Naas room, switched on the burglar alarm, and stepped into the driving wind.

I got drenched on the way to the bus, but had completely dried out by the time the metro reached Ruoholahti, where I felt no wind and could see no traces of snow. I got the 9X and waited for Liisa at the huge new Terminal 2.

She arrived in the middle of a phone conversation. She had spotted where SMT had booked us and ontended to make them change it. Ten minutes later we had rooms in the Radisson Central where we stayed last time, and Liisa paused to explain that she had stayed at the Braavo last week and emailed SMT when she returned to tell them how unsuitable for work it had proved. Then she turned her attention to rebooking our return ferry.

At 10:30 we left on the new Megastar, complete with giant Burger King. We sat and worked using the fat and free wifi, and then I bought some chilli cheese nuggets and coffee. These turned out lethal: both of us burned our fingers trying to pick them up.

Andres met us at the harbour and drove us to the university, going the wrong way down two one-way streets to avoid the traffic jams.

We had lunch at Villa Thai, with Katrin, the director, Birgit, the curticulum co-ordinator, and Andres, the vice-rector. Then we had a long planning sesdion with Andres.

The school has its main entrance in a courtyard and at the end of a long afternoon I stop to photograph it, on the way to retrieve our cases from the boot of Andres’ car. The doors to the main road constitute the rear entrance apparently. This space doubles as the ’real’ front entrance and an outdoor performance space.

We will stop for a beer on the way to the hotel. When we look outside and notice the light drizzle has turned into a severe hailstorm we will stay for a second.

Once checked in, and with the hail turning into torrential rain, we will try to find somewhere to eat very near the hotel. We will find the almost-deserted Saku Gastropub, newly opened and with staff eager to hear our opinions about the food, the crockery, the decor, and the location. We will both have fish and chips and the dessert the waiter can’t recommend highly enough.