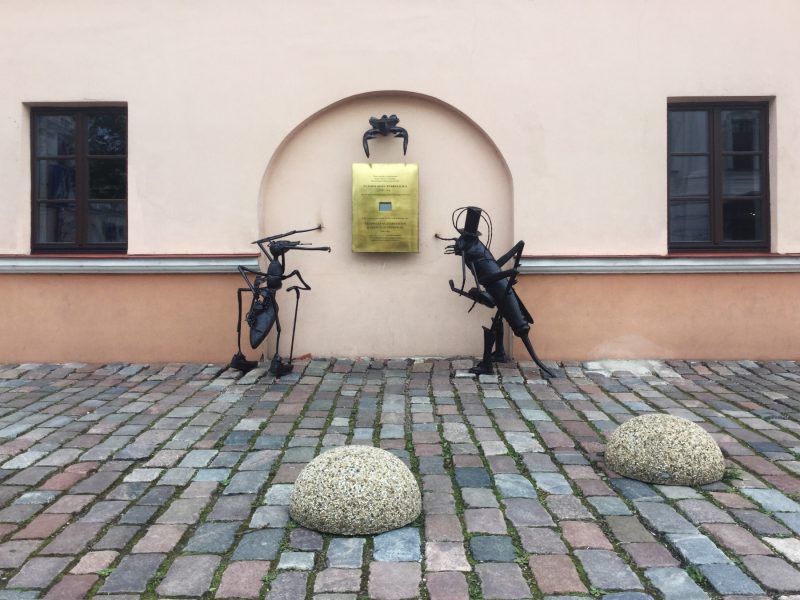 I woke up in room 202 of the Daugirdas Hotel in Kaunas Old Town at 7:30, showered, went down for breakfast, and then waited in the lobby for the bus to take us to Kauno Kolegija.

We spent the day working on the Nobanet e-learning course. Micke and I had the task of leading this, so we had spent time last week planning an approach and a timetable. Neither worked as we planned but nonetheless we seemed to get to where we had planned to get, albeit by a different route.

On the way back it became clear that the roads in Lithuania cannot convey the traffic in Lithuania. Both journeys involved gridlock, as did my taxi ride yesterday. I asked about this and Indre agreed. After the end of the Soviet block everybody bought cars but nobody built the infrastructure to carry them.

We drove out to the college by driving round the main square of the Old Town, and we saw the restaurant where we will eat tonight – five minutes walk from our hotel. I noticed a number of things as we drove round, which included these sculptured insects. Now that we have all walked round there to eat, I wander over to examine them in more detail.

They celebrate the life and work of Vladislavas Starevicius (1882 – 1965) who, in this building, “began his career as a cinematographer. He was the first in the world to create masterpieces of puppet animation”. Presumably these included insects.

We will eat at Medžiotoju užeiga, which translates as something like Hunter’s Lodge, and I will eat red deer medallions.