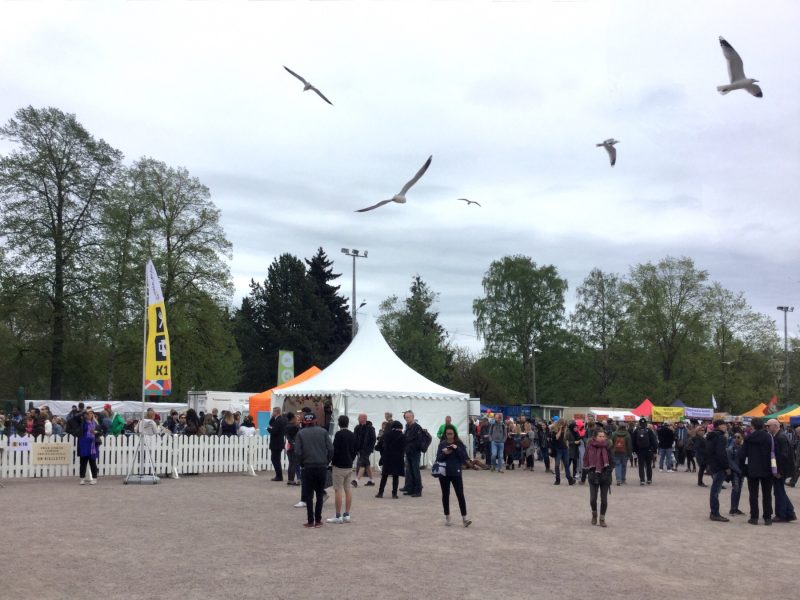 Irma got up early and left for the centre in a taxi, loaded up with packages. She will spend the day working at World Village and she left with food and drinks for the workers, leaflets, and many other bits and pieces. I got up later and ate Weetabix, watched from time to time by Sunshine, who trotted in and out.

I spent the morning doing the weekly cleaning and then cycled to Puotila to meet Naa at 14:15 outside the main entrance to Sokos. By the time we met the weather had changed to something closely resembling late January. We both shivered as we walked to Rautatientori to see Irma in her tent.

I watched The Henna Girls working away, with queues forming to get henna tatoos. I met Sagal who exuded jollity and good cheer as she usually does. Then Naa and I left for the main festival site in the park.

We found some food. I ate samosas which had little in the way of spices in them. As vegetable patties they tasted fine. Naa had some Thai food which, in her words, “tasted better than nothing, just”. As we ate seagulls flocked everywhere.

Food finished I wander into the empty stage area to look at the next band practising. I turn round and see Naa surrounded by seagulls. Since they seem to circle and dive with no thought of going anywhere else, I manage to photograph them.

Soon we will feel too cold to enjoy any music and so we will head back to the metro, pausing to say hello and goodbye to Irma and gang.

Later in the evening Irma will phone me and ask me to drive to Puotila to pick her up. I will do this and then we will finish the evening with a glass of wine.