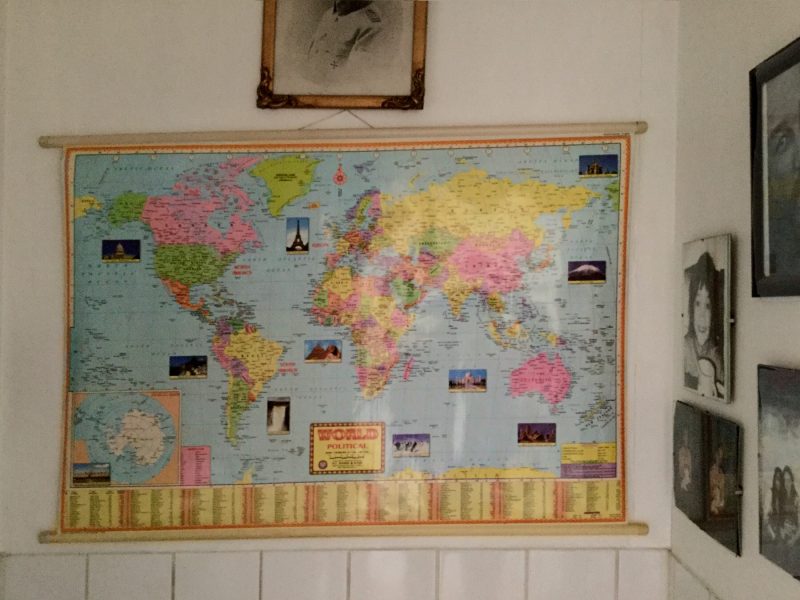 I woke up to bright sunshine. Irma did not have to go to World Village until 12:30 so we had a Sunday brunch. I suggested that I might accompany her and watch Irina perform. She pantomimed her dislike of Irina’s moaning songs, and insisted that everyone would feel better if I cleaned the insides of the windows instead. I accepted this, so when she left I got the bucket and squeegee out.

The windows have double-glazing (quadruple glazing, technically speaking) and so “doing the inside” involves opening the inner window, washing the two inside surfaces, closing the window and then washing the innermost surface. The cat walked out into the sunshine and I began.

Once started I entered a certain meditative state where I proceeded at my own pace and everything followed, step by step. Time passed and by 15:00 I had completed the three windows on one side and one of the bedroom windows. I stopped for several glasses of water and a toilet break.

Standing in the toilet door I can see the map of the world on the back wall. I remember buying it in Delhi when I irritatedly bargained the map-seller down to literally almost nothing. I stand looking at it wondering where I could go right now; where I could lie on a beach listening to waves with nothing to do except think and listen. While I do this, ideas for summer pop into my head. I contemplate writing the novel I have intended to write for about ten years, and I understand how it could work.

I will go back to washing windows with renewed vigour. All in all it will take me five and a half hours. Once I have finished I will have a shower and notice that the sun has finally gone in.

When Irma arrives back I will go for a walk, return for a cup of tea, read awhile, and go to bed early.