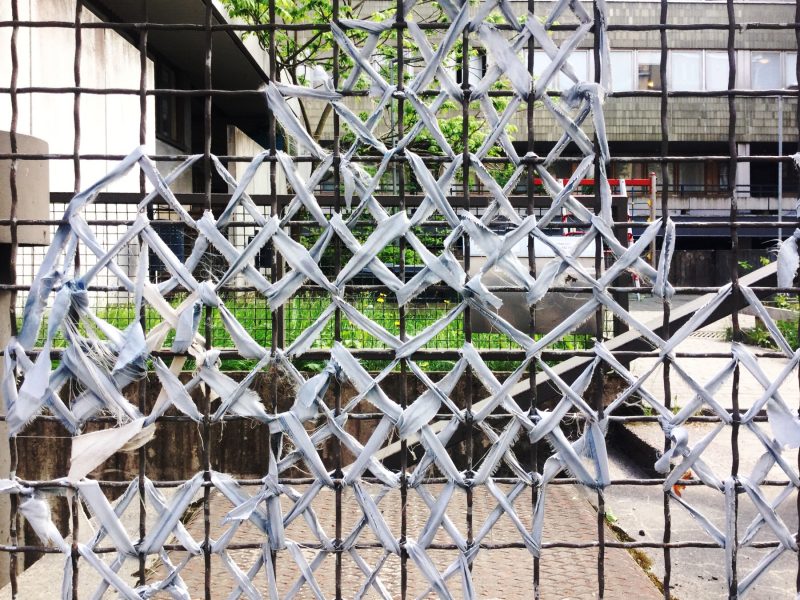 The three of us woke up to another very hot day.

In the afternoon we took Naa to work and then went to see Irma’s father. Töölö seemed full of parked trams, to the extent that they formed a kind of slalom course for drivers and pedestrians. We met a new nurse, fresh from Oulu, who seemed remarkably calm and nice, and extremely attentive.

Walking back to the car I notice that somebody has decorated a fence. Either that or I can see the aftermath of some entirely different and unguessable activity. I decide to photograph the decoration and think about its purpose later.

We will drive to K-Rauta to look at lawnmowers but find nothing that interests us. We need to replace the one in Pellinge which has taken to not starting at all. I want a John Deere to replace it. We will not find one of those, and the cheap “hi I’m plastic” models on display do not look as though they will last as long as they ought to.

Later Irma will mow and I will replace the tyre and inner-tube on the back wheel of my bike, using the terrace to keep out of the suddenly imminent rain. I always find this a lot of trouble but it gets done reasonably quickly and the result makes it worthwhile. In fact, I promise myself that I wil go to Hong Kong again next weekend and replace the tyre and inner-tube on the front wheel, because the actual tyres have begun to rot and it would make sense to have new tyres on both wheels at the same time.