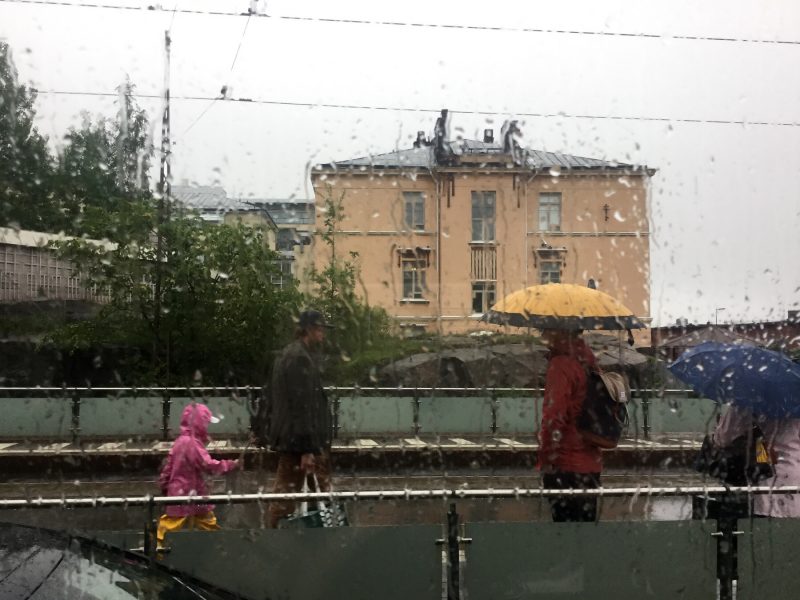 The promised rain came and by the time I woke up at 7:30 the ground lay awash in puddles and water poured down from the dark winter sky. The temperature had dropped too.

I headed out, umbrella at full-flag, and got the 97 bus.

I spent the morning getting through a pile of tasks that had built up while I looked the other way. I answered emails from students who wondered whether the fact that they had forgotten to hand in their work had anything to do with the fact that they had not received any credits for the course. I answered mails from two different students who explained that they had not handed in the required selfies because they appeared on someone else’s selfie. I read two thesis drafts and commented on them. I emailed a reply to one of the replies to my comments. I created the questions for a maturity test. I set up Module 3 of the Storytelling & Experience Design course, read through the comments so far, answered some, and went for lunch.

The kitchen has started its skeletal summer service so I had potato and leek soup.

In the afternoon I finally started on some long-planned upgrades to this site. I began by making some subtle, but noticeable, changes to the spacing of some components. I then added publishing dates for the essays and notes. These had got dropped in the previous update because I couldn’t decide where to place them. Today I could. Finally I managed to remove the giant smiley that had begun to appear at the bottom of pages on my iPad. Jetpack Stats caused the problem. Once I had identified the cause I found a switch deep in Jetpack’s settings which switched it off.

I left Arcada in the still-pouring rain and ran across the road to catch the 74. The bus stops at the traffic lights at the corner of Hameentie and Junatie and waits for a long time. I notice the scene through the window and take a picture. The rain forms the main actor in the image, and that suits me fine.

In the evening Irma and I will go to Naa’s and help her move a load of stuff that used to sit on her balcony down to her cellar. The rain will turn into a mere drizzle to assist us in this process.

Before I go to bed Irma will notice that my right eye has become suddenly bloodshot.