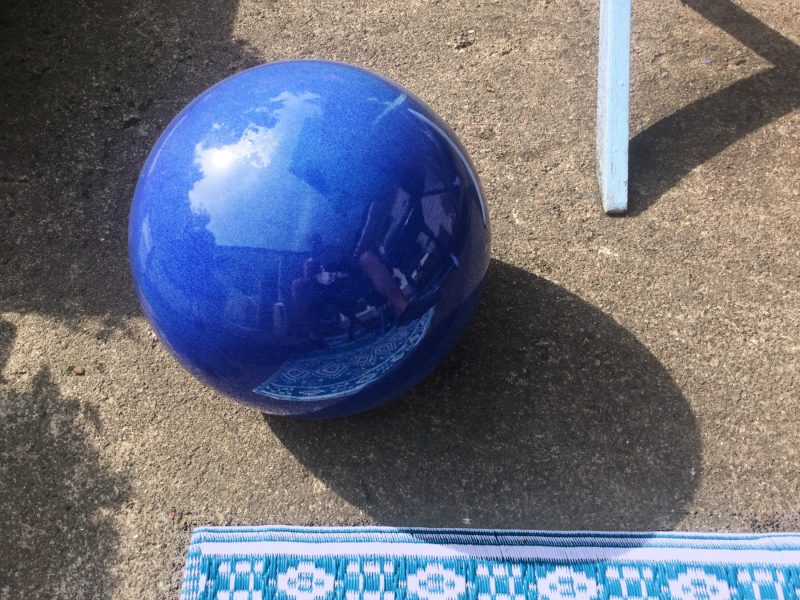 We spend a large part of the day in the garden. My current task involves locating and placing the big blue ball that turns out to have hidden itself in the back shed. I put it down temporarily and decide to photograph the reflections created by the sun. I believe I did this with the same ball last year. Later Irma will move it next to the new tin peacock where it will play the role of a peacock egg.

We will prune a lot of bushes, revealing a hidden rose bush and a poppy bud. We will drive the branches we have pruned to a secret location well away from the woods where the mad woman complains that dropping leaves onto the leaves the trees have already shed ruins the woods and will lead people to think they can abandon sofas there. Dropping leaves apparently constitutes a gateway drug that leads inevitably to the dumping of sofas, garden furniture and old cars.

In the afternoon Irma will drive to Kulosääri Kukka to collect a big bouquet of flowers for her father’s birthday. We will put them in the shed to keep coll overnight.

Later we will sit in the garden with a glass of cider while eating carrots and dips. Sunshine will loll around at our feet. Yesterday he brought a mouse home in the evening. This morning he brought an enormous rat from somewhere.