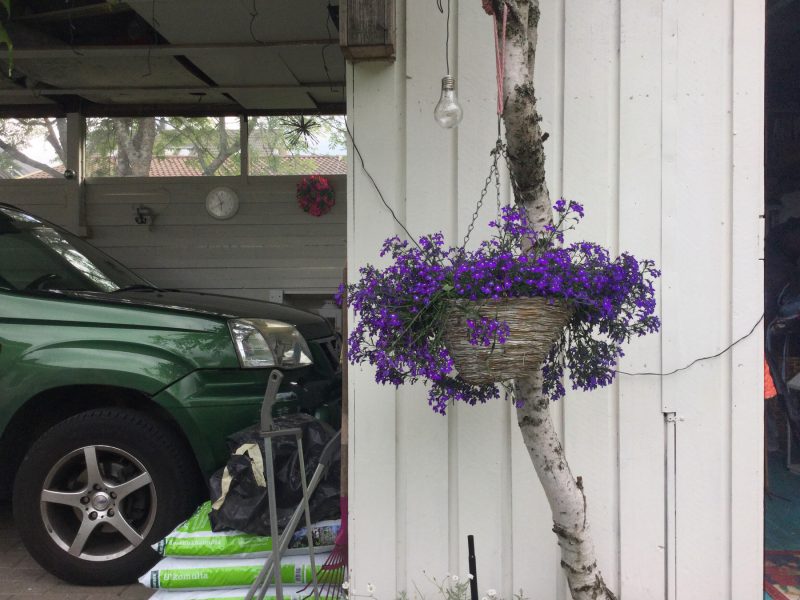 Yesterday Maria and I noted that the summer appears to take place every other day this year. Sure enough, we woke up to a cold, dark day under a sky completely covered with grey clouds. It got worse rather than better, as the wind began to get up to strength.

Naa had said that she would come this afternoon for a couple of days. We looked at the weather forecast which suggested that tomorrow would feel worse than today, and decided we would rather go to Helsinki to see her.

The chicken continued to patrol the garden and has now started to peck at Irma’s toes and climb onto the terrace to peep into the house.

We tidied up, and did some gardening, before leaving in time for the 15:00 ferry.

In Helsinki, we walk around the garden looking to see what has happened while we have stayed in Sundö. I notice a pot of flowers that have doubled in size in front of the shed.

We will both notice that the promised rain has not arrived. We will put several bags of garden debris, mainly from the time Irma did the gardening while Sunshine and I sat in the rain in Sundö. We will take them to a dump we have found.

On the way home we will stop at the K-Market that used to open 24 hours a day as a Valintatalo. I will attempt to buy two bottles of cider, but decide that neither of us will want the strawberry flavours on offer. Instead we will drive home and I will walk down to Alepa to buy some ciders that taste of apple.