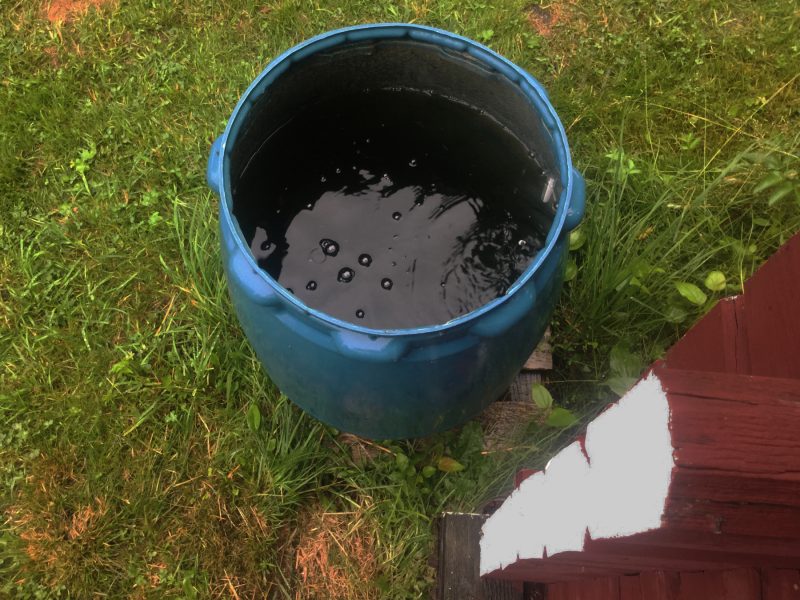 I got up early this morning and noticed that the promised rain had not arrived. I looked around for things to do and straightened everything in Naa’s cabin. Irma had taken all the bedclothes to Helsinki to wash so I didn’t remake the bed, but I did make sure that everything that should sit inside the mosquito net actually did sit inside it. In part, I did this because I had got several mosquito bites in the night and they had served to remind me.

I took the mower out and mowed over the area I had pulled up yesterday, to get rid of the remaining stalks. Then I had breakfast. Sunshine had slept remarkably late so he had breakfast with me before going outside.

At about 11:00 I had a phone call with Irma who had taken Hari to the metro so that he can go to Kamppi and take a tram to the West Terminal. He travels to Estonia today to take part in a week-long yoga festival. Irma told me that she has had today’s planned activities disrupted by a series of unexpected events. We agreed to decide later what this means for my early morning trip to Helsinki tomorrow.

As we talked the rain started. The promised heavy deluge suddenly dropped from the sky but before I could put the phone down it stopped again. Sunshine raced in though from wherever he had gone.

The deluge had a sequel: a thin drizzle that covered everywhere for several hours. I went into the sauna house to spend some time going through the online summer course. The students should have handed their final projects in today but only 15 of 67 had done so. I had some emails asking for extensions and so I emailed everyone to give them a one week extension

After this I attempted to do some writing.

At 15:00 the deluge restarted and carried on for an hour and a half. I realised that some of the potted plants would get waterlogged and so I raced out to move them under cover. First I moved the most vulnerable two and then at some point I went back for the rest. Standing on the steps of the sauna house, wet but not drenched, I notice the rain barrel filling up rapidly.

I will check it an hour later and find it completely full. I will also notice that the sky has suddenly cleared and the sky has turned blue. This will seem distinctly better until it becomes clear that the blue has signalled the start of a gale force wind. The garden chairs will blow over and I will have to fold them up against a tree to keep them from blowing away. The wind will make a noise capable of rendering conversation impossible as it shakes the trees and blows small branches off them.

This will keep up with varying degrees of force for the rest of the evening. Sunshine will make one attempt to go outside and get no further than the doorstep, where it will sit looking out and moaning.

I will speak with Irma and check the bus times for tomorrow. I can get a bus from Tirmo at 8:15, which will leave me time to give Sunshine breakfast and let him out for the day.

If the weather offers the warm gentle day that the forecast promises he will not even notice that we have all left, until we all arrive back sometime in the evening.