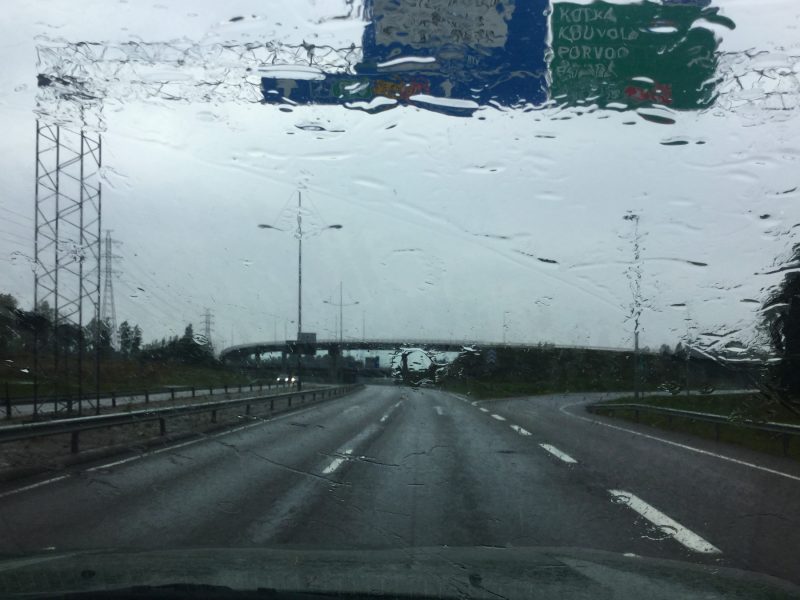 After a late breakfast Irma went to fetch Naa and we packed the car. The weather had threatened rain since we woke up and now it started to actually deliver.

At 14:40 we leave the house to drive to the airport. Irma and Naa will fly to Nice where they have rented an apartment in an old castle. Irma wants to make sure that Naa has at least a week of proper holiday in the sun before she starts college.

The rain comes down in torrents almost all the way to the airport. It eases off just as we get there so that I can unload the suitcases without getting soaked. I get back in the car and drive home. On the way back it rains so hard that visibility drops to a few metres. Fortunately not many drivers seem to feel the need to spend Saturday afternoon on the ringroad, so I can slow down without worrying about causing queues.

As soon as I get home the rain will stop and the cat will arrive.

Pixelache has a planning party planned for this evening so I will buy some beer, as promised, and deliver it to Suvilahti where I will find very little happening. Oddly optimistic that something more might happen later, but nowhere near optimistic enough to wait to find out, I will leave my cans and race home before the rain starts again.

I will tidy up and then read until Sunshine and I communicate with Irma and Naa whose photos will make me wish I had gone with them. After a final flurry of whatsapping I will retire to bed and fall asleep before 23:45.