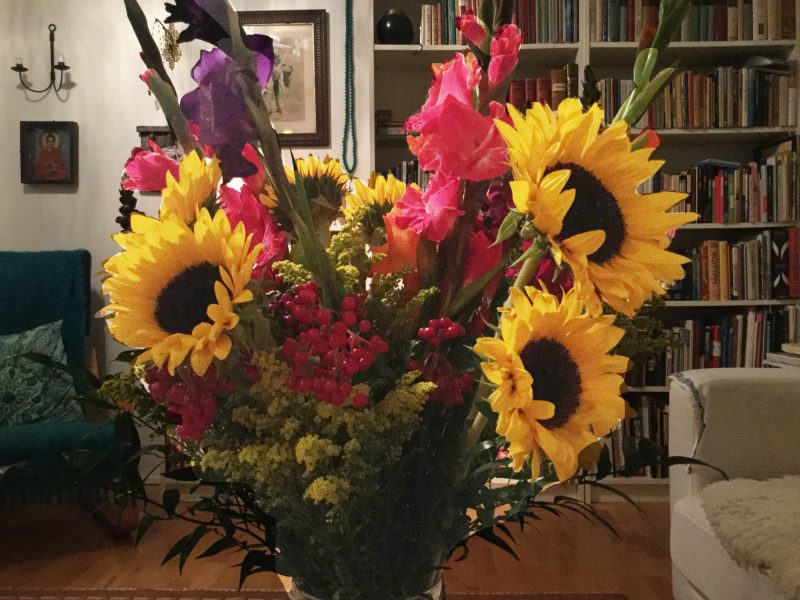 I slept right through the night and woke up at 7:25 having an imaginary conversation with Auo. I found myself saying, “Isn’t it odd? You have been dead for almost a quarter of your life now!”

Irma intended working from home today so I got up quietly, had breakfast, and left a Hot Wheels truck and 2 Lego minifigures at Auo’s place at the breakfast table.

I travelled to work with Nathalie, whom I met on the platform at Puotila metro station. We talked over yesterday’s meetings and saved ourselves the trouble of another one today by making some decisions on the tram.

I spent the morning enrolling students in Lynda and assessing the final student from the summer course, who had returned her work very late, but had done well enough to pass anyway. I also continued to wrestle with the CMS course, which I intend to make an easier, smoother ride this year – without boring the more capable students. Sometimes juggling and teaching feel like different aspects of the same activity.

In the afternoon I created a Photoshop image manipulation test for a student who missed part of a course last year and therefore cannot get a grade until he manipulates an image or two. I also finalised the all-new, all-interactive book exam course which now makes pedagogical sense. I showed it to Jutta for agreement.

Naa arrived shortly after I got home. We both look at the massive bunch of flowers that Irma got to commemorate or celebrate Auo’s sixteenth birthday. They have overflowed the big vase and now sit in two vases. They look and smell very nice indeed.

Irma will put sixteen candles on four extremely delicious-looking cakes and we will blow them out before eating the cakes. We will then look at sets of old photo albums that Irma has dug out of a cupboard.

I have not seen these images for over a decade, and I will not remember some of them at all. They will prove that we have not fooled ourselves. Auo really did grow at an astonishing speed. We will look at photographs taken at her first Christmas which clearly show her standing on her own at four months. We will see her running at less than a year and remember that she also talked fluently when Irma took these photographs.

I will remember the impossibility of keeping her in her buggy after her first birthday. From then on we only used it for speed. She would agree to sit in it while I walked fast to the shops but leap out as soon as we got there. This applied to buses and trams as well as shops.

I also remembered the time when she phoned me from Chile because she and Irma had to fly home through New York and she felt convinced that they could get out and actually go to New York. She phoned me with a list of things she wanted me to google. I did and phoned her back and, as a result, she and Irma spent a day in New York at Grand Central Station and other places.

By the time she got home she had successfully ticked off been to New York from her to-do list, and could boast about it at school.

We will all wonder about the amount she packed into twelve years, four months, thirteen days; while missing her and still feeling angry that she had life taken away from her when she had more life in her than anyone else we know.