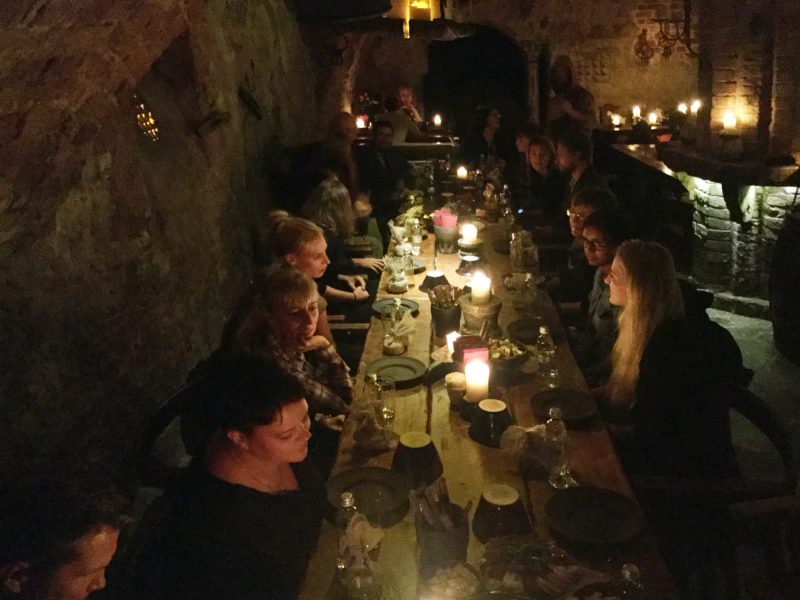 I slept right through the night and woke dreaming about playing the part of a wounded surgeon forced to play the part of an insecure poet in an episode of Bonanza at 7:30. I shaved and went down to breakfast.

Who can resist gooey fruit cake for breakfast? Apparently, not me.

I met some of the Estonians as I left. They had driven here and arrived just after midnight.

We worked until 12:30, had a three course lunch, and then worked again until 17:00. Micke and I led the creation of the scripts for the introductory videos, and by the end of the day most of the ten groups had a draft ready.

At 17:40 we all meet up again in the lobby and walk into the old town to a medieval restaurant called Rozengrals. We walk down several levels of dark basement until we reach our table. In the darkness nobody can tell what they have to eat. We pass plates round and try to guess what they contain. I put some croutons on some salad to discover a few minutes later that I have covered my greenery with sugar cubes.

After the meal Hafdis, Micke, Vera and I will stop at The Queens “traditional pub” where the staff all look as though they would prefer to attack you rather than serve you. I have the clearest view of them and come to understand that they deal with each other in the same way as they deal with us: with murderous looks and worrying snarls.