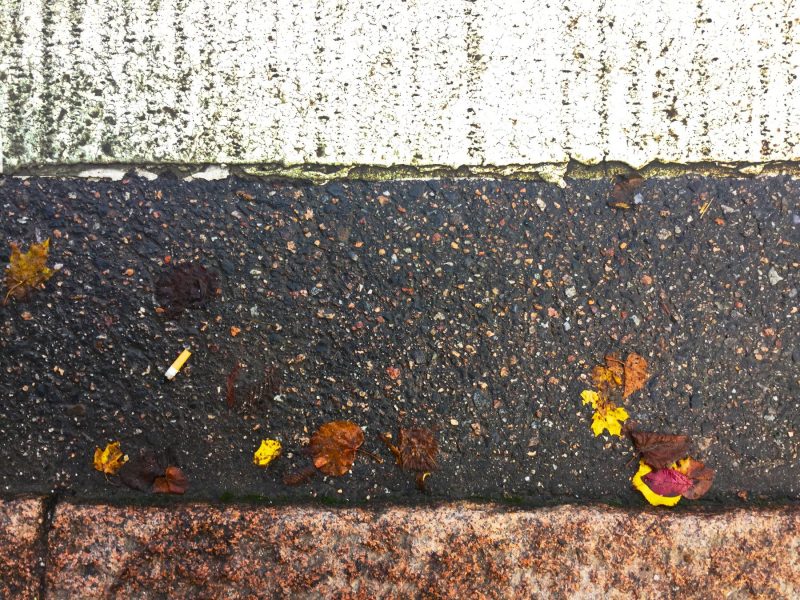 I woke up to the sound of Irma moving around, and got up when my alarm went at 7:30. I decided not to cycle because we will go to the British Embassy tonight.

Getting off the tram at Arcada I walk over the grass to the small road in front of Arcada that officially remains part of Hameetie although common sense suggests that it should have its own name. I look down as I step onto the pedestrian crossing and notice the leaves and litter. I stop to photograph them to the delighted amusement of an old woman passing by.

I will set up a Photoshop examination for a student who will now take it for the third time. He did not turn up for the first one. He walked out of the second one without saying anything to anyone, and he will simply fail to turn up for this one. I will sit in the allotted room for thirty minutes to make certain that he cannot plead that he arrived ten minutes late because the bus failed to arrive.

At lunchtime we learn that Amica will serve a special buffet to celebrate My Restaurant Day. Nobody has any idea what this means, but Maria and I will go down to investigate. We will get a vegetable smoothie and see that the promised buffet appears to consist of the normal food, although the kitchen staff will explain the difference by instructing us that we can mix and match today. I will duly add some potatoes to my pasta casserole.

We will also get a free ice-cream.

In the afternoon I will race through a mixed bag of small tasks, including registering for a conference, planning a session at an unconference with Oliver, answering some mail, rearranging some meetings, and reading about how to apply for some grants. I will also persuade Maria to act as examiner for Mark’s thesis.

I will go to rektorskaffe in search of the carrot cake that Mats informs me about when he returns. Finally I will race from the building to meet Irma for this month’s Well in the Park. There I will talk with Tom about the platitudes we heard from the Baroness at the town hall meeting on Tuesday.