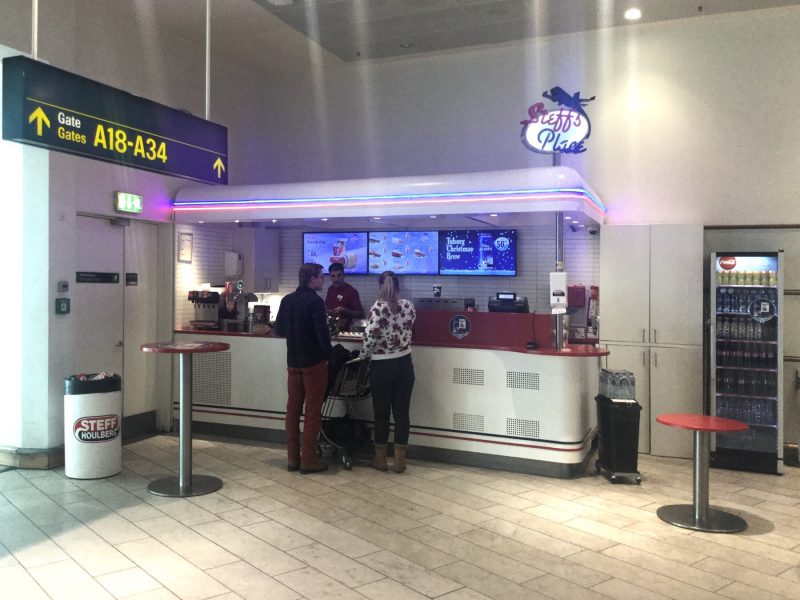 This morning I woke about 8:00 wondering why I had finally succumbed to a head cold. Most people have remarked on the hotel heating, which seemed almost non-existent. Every night I woke up either too cold or too hot, adjusted the duvet, and went back to sleep to wake up again in the opposite condition.

I had a large breakfast today since I did not expect people to serve sandwiches and cakes every hour, throughout the day. Hafdis and Vera also departed this morning so we met in the lobby at 10:00 and walked to the station to catch a train.

Yesterday evening I had discovered that Pete Wylie had finally released his album Pete Sounds , made with crowd-funding using PledgeMusic. I had pledged my money some two years or more agao, and I downloaded it before I went to sleep. Today, waiting in the airport I listened to it for the first time, and it did not disappoint. It could turn out his best album. Certainly on two listens it seems his most consistent.

On the way to the gate I spot a Steff’s sauage stall. I have 25kr in change and a sausage costs 25kr. I get one and the man tells me that not all sausages cost 25kr, and the sausage I have chosen, and he has covered in mustard, costs 30kr. I pay with a card and put the change back in my pocket. I have seen these stalls all over the place in Copenhagen, and so I stand for five minutes finally sampling one of their sausages, which I admittedly like.

I will spend the flight thinking about a mathematical problem that has bothered me for a week. If add 1+2+3 or 1+2+3+4+5+6+6 or any similar sequence do you have to actually add them, or can you devise a formula that will do the job for you? This started because I had imagined putting 1 object on the first square of a chessboard, 2 objects on the second square, and so on up to 64 objects on the last square. I wanted to know how many objects I would need, and realised that I did not want to fill a piece of paper with 1+2+3 etc.

When I get to Helsinki I will google and discover, to my surprise, that the Pythagorans had explored this several thousand years ago but they had become interested in it from the other end. They had realised that some numbers such as 6, 10, 15, 666, and 2,080 constituted triangular numbers because you could lay them out as equilateral triangles using marbles. So 6 consists of 1 marble on the top row, two marbles on the second row, and three marbles on the bottom row. You can make 10 by adding a fourth row of 4 marbles, and then 15 by adding a fifth row of five marbles. They had invented the same formula that I (re-)discovered in order to explain why only some numbers counted as triangular.

Apparently I used a form of mathematical induction – which I call making your own amusement.

I will get home by train and bus and arrive at about 17:10. Irma will greet me and Naa will arrive sometime later. By the time she comes we will have gone to Prisma for Saturday shopping and returned.

Irma will cook salmon. I will give the women their duty free gifts: Chanel eau de toilette and chocolates. We will eat and drink into the night.