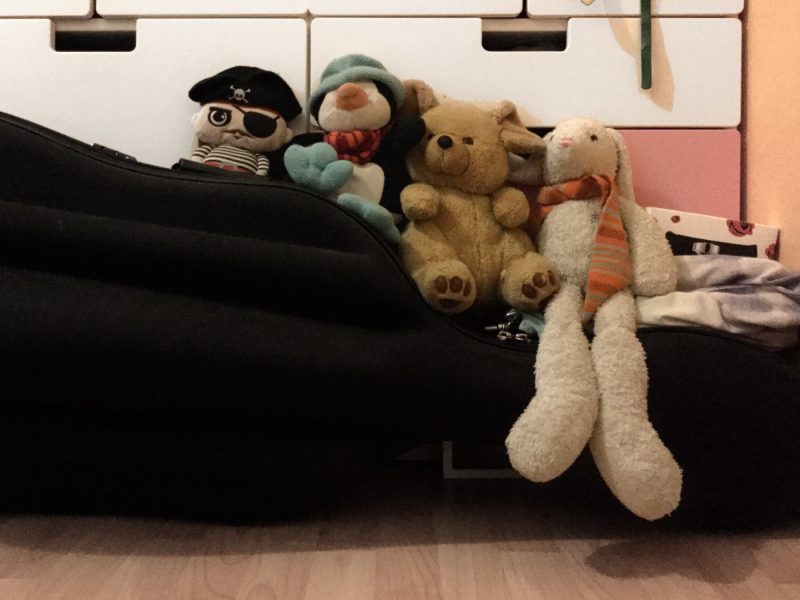 I woke up to discover that Naa and Irma had prepared for Father’s Day. At breakfast I received some Calvin Klein scent from Irma and a handmade voucher from Naa for another trip to the bowling alley.

We spent the morning and early afternoon doing things in the garden. I chopped down some tall plants that needed chopping down. Naa did some final weeding, and Irma rearranged and added garden lights. In the middle of the afternoon, sudden rain drove us back inside, but not before we had bagged some of our cuttings and given them to Arto who has ordered a truck to take away the tree he had chopped down. He told us that a couple of bags of leaves would make no difference at all.

Conversation in the darkening room turned to Auo, as it well might on occasions like today. Irma got some books out that she had made and kept during Auo’s first few years. We looked at some of a diary she had asked me to fill in from time to time. She really did start speaking at the age of about nine months and she began by mixing her languages. Once I read that she used to say “Anna milk” I could quite clearly hear and picture her saying it, in a quaintly belligerent way. I also remembered the way in which she used to walk around with a bottle of milk clamped in her mouth like a cigar. She would pull it out when she had finished it, wave it, and should “Anna milk!”

A bit later I go into her old room and see her stuffed animals sitting on her cello. I sit down and photograph them, and remember her quietly for a while until Irma comes in and sees me sitting on the floor, and understands immediately, and smiles sadly. I miss her a lot, and some days she comes right into the front of my mind and stays there. Oddly I don’t mind this at all. It makes me sad but it keeps her alive, and the second seems to make the first bearable.

Irma will drive Naa home through the rain, and I will do the vacuum-cleaning that I didn’t do yesterday because I didn’t arrive in time to do it.