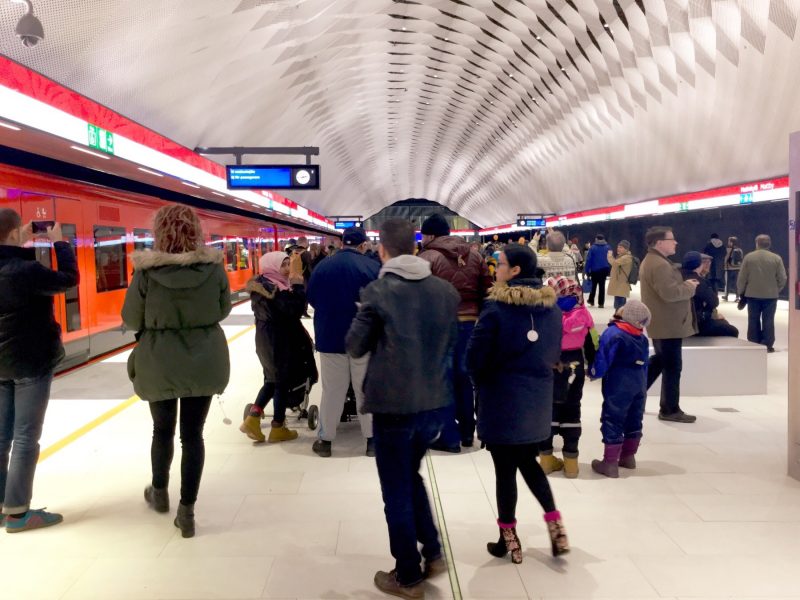 Last night we all went to bed early, after a cup of refreshing tea, and despite that we all slept late this morning. I got up and went for a forty minute walk, during which I went to Prisma to buy a present for Irma.

After brunch we decided to go on a metro ride. The new western metro finally opened this morning and we wanted to see the new stations. We drove to Puotila and caught the metro. As it went west it began to pick up people and by the time we got to Kamppi the metro had filled to standing room only. By Ruoholahti even the standing room had gone. Irma and the woman next to her got more and more excited and people started taking photographs at each of the new stations.

We will eventually leave the station and finds ourselves right in the middle of Iso Omena, a shopping mall big enough to house 52 places to eat and drink. We will wander around for ten minutes before heading back to the metro, where we will join another queue to get down to the platform. We will get off at Itäkeskus and Naa will go home to meet Sampo. We will walk through the mall, pause in Stockmann, and end up in Prisma.

Irma will see exactly the same thing that I bought this morning as a surprise, and I will have to run over and shout “Don’t buy that!” I will then have to explain why.

Late in the evening, after some wine, which came after some cider, Irma will decide that we should order a taxi and go into the centre; and so we will. We will start at Bar 9 and then go to somewhere called Gasseli. Here we will lose each other after Irma decides that we should go now and disappears before I can see where she has gone.

I will stop for a sausage and then walk to the station to get a taxi. By 2:34 I will get one and shortly before 3:00 I will climb into bed. Irma will find it all very amusing.