On November 12, the sovereign state of Asgardia left earth and ascended into orbit. According to C-Net,

Although the physical territory of Asgardia will consist solely of what’s basically just a floating file server in orbit, the self-proclaimed “space kingdom” insists the deployment of the satellite Asgardia-1 is just the beginning of a much grander vision of a true space state.

Asgardia is probably one of the few self-declared sovereign states you could fit in a backpack. Asgardia-1, a small cubesat that’s roughly the size of a loaf of bread, is among the 14 cubesats that will be launched from Wallops early Saturday aboard an Orbital ATK Cygnus spacecraft bound for a long stop at the International Space Station. It will then have to wait at the ISS for a month before Cygnus detaches and heads to a higher altitude where the satellite can be deployed.

Asgardia-1 will carry some key files, like the national constitution, flag and database of all its “citizens” (citizenship requires little more than filing out an application online and agreeing to the terms of the constitution), but most of its storage is filled with files uploaded by citizens. So far, over 100,000 humans have accepted the terms of the constitution and uploaded over 18,000 files to the satellite, according to Asgardia’s website.

The cubesat “will be our foundation stone, from which we will look to create a network of satellites that will help protect our planet against asteroids, solar flares, manmade space debris and other space hazards,” Asgardia’s leader and current one-man government, Russian nanoscientist Igor Ashurbeyli, said earlier this year. 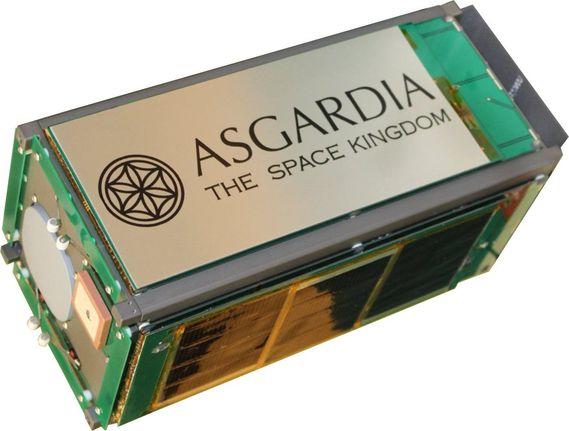 Asgardia has its own calendar with thirteen months of twenty eight days each, totalling 364 days, with one no-month Year Day at the end of the year (and presumably two in leap years). They point out that the “thirteenth month, Asgard, is between June and July. Every year and month begins on a Sunday, so the same date in each month or year will always be on the same week day as well”.

The founders, headed by Dr. Igor Ashurbeyli, worked on many other aspects of the new country’s existence prior to the launch of the satellite. They have a system of government in place, as well as citizenship, and a constitution. The first three items in the constitution declare:

It also has a Supreme Space Council.

The Supreme Space Council is a special governance body in Asgardia that analyses the adherence to laws and the actions of governmental bodies to Asgardia’s Supreme Values.

The Council is comprised of a Chairman and its members, Asgardian citizens who have particular achievements in the area of building the Nation, including economics, science, culture, art, education, the rule of law, healthcare, human rights and freedoms, parenting, sports, charity, and/or other public or government achievements.

The status, organisational foundations, powers, and operational procedures of the Supreme Space Council shall be set by the Constitution and Asgardia’s laws.

Apparently parliamentary elections will soon begin, and applications for candidates have begun.

According to its news site, “Our space nation is growing! The number of Asgardian citizens has surpassed the 140,000 mark. Together, we made one more step towards recognition of the space kingdom by the United Nations and the world community.”