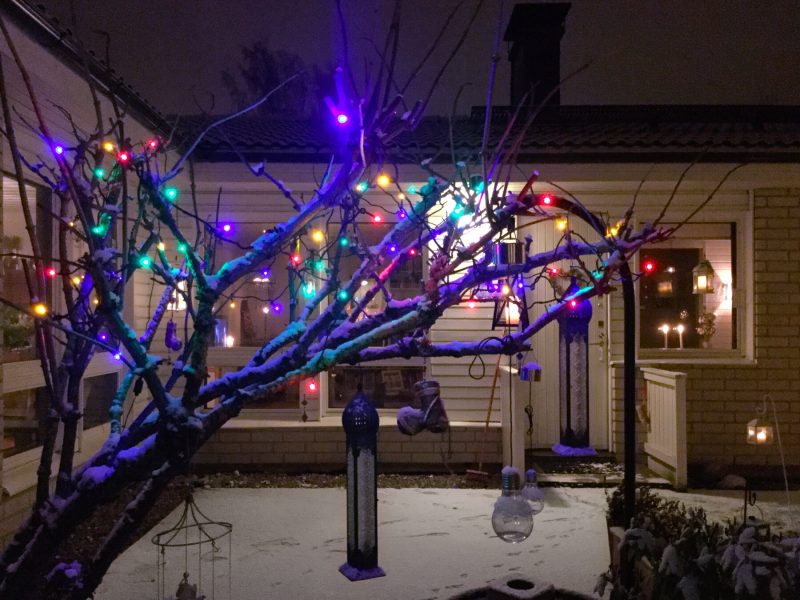 We woke up late to a snowy Independence Day. We had breakfast, got dressed and made up, and then drove to the centre.

Irma tried to find somewhere to park and, just as we felt we should give up and go home, she found a place. It took us ten minutes to walk through the freezing cold to Finlandia talo, but we made it before the show started. We got our tickets, went into the foyer and bumped into numbers fo people we knew from Sagal to Sanal. We stood talking to Sanal and his friend for some moments until Irma’s boss Mikko appeared with his wife.

We had arrived to see the multicultural independence day celebrations – monikulttuurinen itsenäisyyspäivän juhla – and we had seats in the second row, thanks to Irma’s position. Cristal Snow and Suvi West hosted, and both got funnier as the concert progressed and they switched from relying on their cue cards to improvising around their cues.

The show started at 13:30 and finished at about 16:30. It began with a transcultural musical performance and finished with a toast of sparkling wine in the foyer. In between it included speeches, dancing, rap, and choral singing. It also included a recording of the broadcast declaration of independence made in 1917 by P.E. Svinhufvud.

We felt that the best performance came from two men who danced in a gymnastic hiphop art style, and oddly they did not seem to feature in the programme, so I never knew anything about them, except for the fact that I registered their performance as truly astonishing.

After the show we walked back to the car and attempted to drive to Irma’s mother. We managed in the end but, since every other person in Helsinki seemed to have decided to walk or drive through the centre, it took us a long while. The police had begun to prepare for the evening’s parades, demonstrations and counter demonstrations (students, fascists, and anti-fascists respectively), and this also slowed down the traffic.

When we got to Kamppi we arrived just as Kim and his girlfriend Dania got up to go. They stayed for a while and we chatted, and then we had coffee and cake and left.

At home Irma lights candles in the house and in the garden. I go into the garden where nothing is now falling from the sky, and photograph the lights. I stand there longer than I intended because photographing lights in the near dark turns out harder than I expected. Eventually I get something that looks approximately as it should and vaguely festive. Photographing the blue and white candles, however, proves totally impossible.

Once indoors, we will watch the MTV3 pre-party show and then stare at the slow procession of academics, celebrities, the deserving, and politicians, into the President’s Ball, noting the dresses and the hairdos.