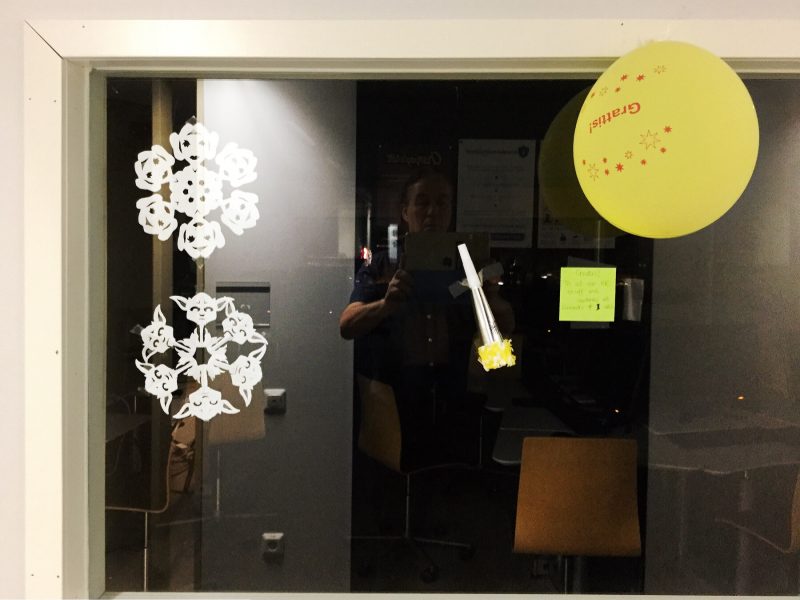 This morning began dramatically. Merja appeared in our driveway as we got up. We stumbled to find some clothes to open the door and see what she wanted. She had taken her dog for a walk and picked up her car keys rather than her house keys. She could not get back in the house.

She wanted to phone one of her children but she didn’t know their phone numbers; a modern dilemma. After ten minutes of trying to contact them via Facebook or Instagram, she decided to drive to her elder daughter’s apartment to wake her up, and off she went. We carried on getting dressed and having breakfast. As I left for the bus Merja passed me in her car, with the dog in the back peering through the window.

I got the 97V in pitch darkness. By the time I got to work dawn had arrived and we started another mild late summer day.

I began by bringing some notes up to date. I created a discussion forum for the groups on the Digital Mediascape course, in order to make certain that everyone had got into a team. I uploaded a photograph of the Feel the Smoothness workshop on both this site and Pixelache’s site. I had a brief skype chat with Jutta.

I had intended to finally polish Topic 9 of the Nobanet e-learning course and declare it ready, but the day slipped away from me. Some students needed some printing done and then they needed it redoing, and just one more time. So time passed. I received an important mail from an MA student who has had her grant application approved, which means that she has a project that she can research. The theoretical has become practical and she suddenly had a lot of urgent questions concerning what she should do over Christmas.

At 12:15 I went to S-Market to shop for lunch, did the shopping and realised that all the staffed checkouts had 20 metre queues; and all the queues contained a fair amount of people buying trolleys-full of stuff; much of the stuff in the form of cans of lager. I left my basket and walked to K-Market where I did my shopping, noticed that everything cost more, but used the self-service checkout and completed the entire mission in just over five minutes.

I spent much of the afternoon in a team meeting in which we looked back and then looked ahead. My neck got sore as we moved back and forth between the past and the future. After this I had a large cup of Horlicks Gold and sat looking out of the window. I consulted the i-Ching and got K’un The Receptive. I checked back and realised that I got this eight months ago.Not only did I learn that “the receptive brings about sublime success”, I also discovered that “the good fortune arising from resting in firmness corresponds to the unlimited capacity of the earth”.

Consider me resting in firmness, then.

I notice that the remnants of the Horlicks have started turning into rock formations at the bottom of the mug so I go to wash them away. On the way back I pass the online media studio where students have spent the day constructing the material for the second of two broadcasts; hence the need for photocopying this morning. They windows have received some left over decorations, including Jutta’s paper decorations. I look at it and decide to photograph it. I make a rare Alfred Hitchcock or Stan Lee-like appearance in the image.

Ten minutes later I will leave the building and head for home. I have ironing to do.