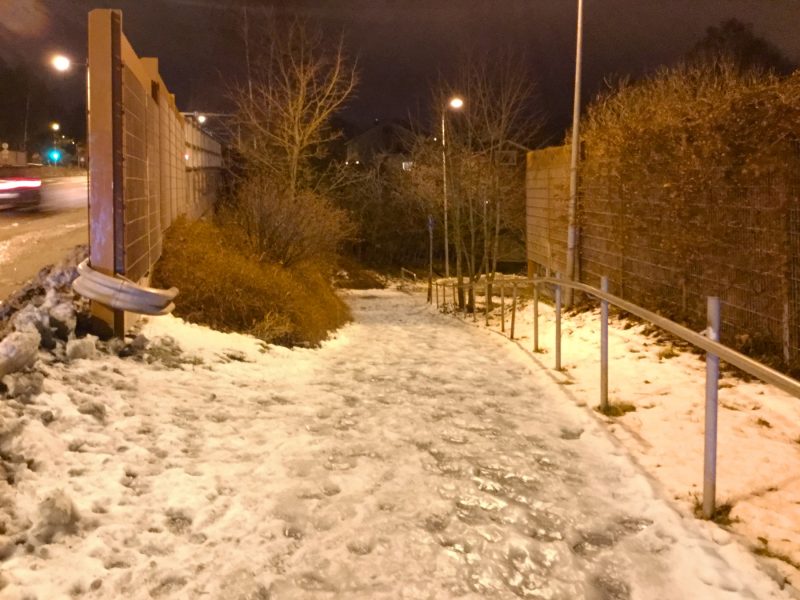 I woke up at about 3:40 this morning in the middle of a nightmare that involved me getting arrested at an airport in the Middle East for reasons that made no sense even in the dream. I had one of those meta-dreams which I have not had for years, in which I woke up from the dream to discover that I had woken in my cell, and the dream had apparently become real and that I really had been arrested at an airport. I then had the sleep paralysis fandango in which I had to will myself awake, to finally find myself lying in bed tense and sweating.

I failed to get back to sleep much after that because, every time I did, I found myself having to force myself awake from the same nightmare.

Irma had an early meeting in the centre this morning so she got up and left first which, in the circumstances, felt like a good, well-planned idea.

I washed and dressed slowly while Sunshine lay on the floor watching. I had breakfast and left the house an hour later than usual. I skated down to the main road, slid across it, and waited five minutes for the 97V.

I began the day at Arcada by reading three student draft theses, and making comments on them. I then had a long talk with Tomas about the Innovations course that begins while we ride around Kerala in tuktuks. The course will run for fifteen days from 9:00 until 17:00 and Day 6 begins the day I get back to Arcada. I therefore wanted to know what I will find when I get back, and Tomas told me.

I worked with some students in the studio, showing them a few pointers for the Wordpress theme they have underway; and in the afternoon I made another desperate effort to produce a finished draft of the Nobanet topic.

At 15:45 I left to catch the 6T tram to Hakaniemi, where I will catch a bus to the British Embassy. There I joined Irma and we went for sherry and mince pies, and something festively British but entirely unexpected: miniature slivers of shepherd’s pie. We chatted with Tom and his wife, and met Carol, from Edinburgh, who works in the American Embassy where he husband does something diplomatic.

At 18:45 we left and Irma gave me a lift to Kamppi where I walked to Lapinrinne and found Kilta-sali, where Arcada’s Vinterfest had just begun. I sat opposite Marja, the finnish teacher, and next to Sandra, from Student Service, who has an endless stream of odd and amusing stories ready for delivery in several languages. Her husband used to captain a ferry between Stockholm and Helsinki and now has overall charge of the sea traffic in and out of the harbour at Vuosaari. She learned sign language at the age of 15 and noticed differences between Finns and Swedes who sign. She also explained how deaf people group the people they want to talk about visually in and imaginary shared space in front of them and then point to where they have positioned someone to indicate who they wish to talk about them.

We had a perfectly acceptable buffet that stretched over several hours, so that the dessert arrived at about 20:20. I stayed for that and then left. I had intended on looking in at Pixelache’s pikkujoulu on the way home, but decided that I no longer had sufficient time.

I got out of the metro at Itäkeskus, leapt up the escalator, and just caught a 97. Now, getting out in the ice and snow, I look down the slope at the state of the path and decide to walk along the road to the traffic lights and cross there. This has the benefit of not making me walk down a slippery slope.

I will get home about 21:10, take my outdoor clothes off, and slowly get ready for bed while chatting to Irm about the days we have had.