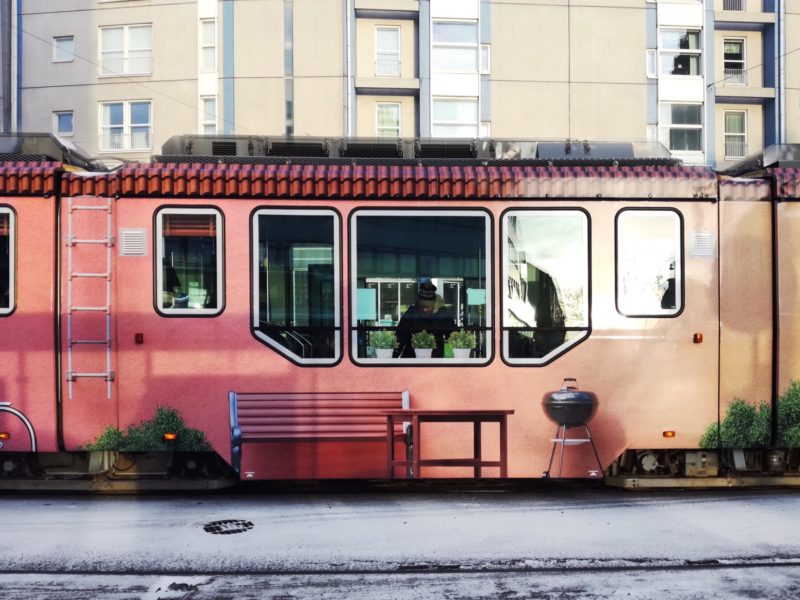 Last night I went to bed about 21:40, moved back and forth for two minutes deciding which side to lie on, and then slept without waking up until 6:10, when I got up to go to the toilet, returned to be, and fell deep asleep again. I woke up to the sound of my alarm at 7:30 feeling completely refreshed.

I read online that temperatures this week will drop to “a dangerous level” so I made sure I had a scarf on as I left the house into gently falling snow. I decided to walk down to the gas station and get the 97V at the earlier stop. This stop has a bus shelter and every single bus to Itäkeskus stops there. I got there and three minutes later the 97V appeared.

At Sörnäinen I make a quick decision to get a tram rather than a bus. Standing at the tram stop I see a fully decorating number 1 approach, going the other way. The decorations relate to a housebuying company and the whole tram has the look of a little house. The front has a set of plant pots in a tray. At one point fully decorated trams became a big thing but they have died away recently. I have not seen one this good for months.

I will begin my day at Arcada by going for a coffee with Jutta who will ask if I plan to go to the meeting at Stoa this afternoon and follow this with a question about whether I want to have lunch at Itis. I reply yes to both questions. I will have a meeting with Nathalie about several things. Firstly we will discuss the teaching-in-Pakistan malarkey that Lasse and Faisal have dreamed up. I will learn that Lasse plans to retire in six weeks, which will downgrade that adventure in my mental scale of importance, because I doubt Faisal’s ability to push this through on his own. We will then talk about something else entirely which which greatly surprise me. Hmmm, I will think: Irma and I need to talk about this.

I will then email Luke with the details of the Manchester fandango and email Steven Hadley to thank him for the review he sent me and the advance warning inherent in it. Thanks to this I will gear up for a lively time reigniting arguments I thought had fizzled out.

At 13:00 Jutta will claim to need food right now and suggest we go to Stoa early and somewhere eat there. We will drive to Itis in one of Jutta’s Volkswagens – the newer nineties one, not a Beetle – and talk about Irma’s father and Jutta’s grandmother, who also lives in a palvelukeskus where, at the age of 101, she has had Altzheimers for twenty five years.

We will decide to eat the lunch time buffet at Thai Orchid and the food will taste as good as I remember. I will have soup and some sushi and then sit down with a plate of main course just as Naa phones to say that we need to see Ukki right now. I will leave Jutta eating and walk over the bridge to Stoa, where Naa and Irma have just finished her application for a summer job.

Naa will see this as a remarkable, if slightly ominous coincidence: all three of us in the same place at the same time in a most unlikely manner. I will learn that Irma’s mother has already left in a taxi, and by the time we all get there Irma’s father will have died. Apparently he literally passed away in a matter of moments.

We will spend the afternoon there with him as things that need sorting out get sorted out and eventually a man comes to remove his body. We will take Irma’s mother home and then all go to Vartiokylä.

Later Irma will take Naa home and we will go to bed early.