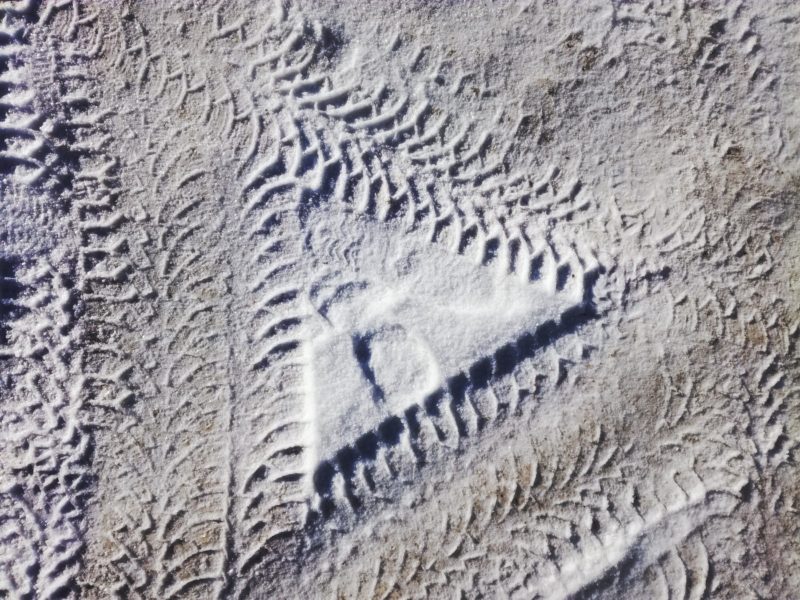 The temperature this morning had fallen to minus twenty and Irma made sure that I had enough clothing before I left. I had a pair of Ukki’s super-warm gloves, a woolen hat, my hood up, and two scarves, and five metres from the house I stopped feeling overdressed and started feeling just about warm enough.

On the way out I pause to photograph some tyre tracks in the crunchy, hard snow. The bright light makes them stand out and gives everything an extra-sharp appearance. Fortunately the promised wind has not arrived yet, and so the temperature does not yet feel like the minus thirty that it will later. I walk down to the gas station to huddle in the bus shelter.

The metro has its third major problem in a week and so I will wait on the platform for fifteen minutes before finding myself literally unable to get on the metro that arrives. I will wait another five minutes and get on one that still has enough room to enter if everyone holds their breath. I will have to remove my second scarf in the sudden heat.

At Arcada I will catch up with some business about a project we have worked on with a Norwegian team. Liisa will appear and we will talk briefly about Dublin, and specifically about the problems with booking hotels.

I will review the dummy Pixelache website that two students have now finally fixed. It looks good and, in my opinion at least, functions better than the current site.

At 15:00 I will have a Skype meeting with Oliver about Convivial Mechanics. We will agree to move the event that we had planned for Saturday to April 28th, for a whole host of reasons. We will change its format to include a bout of toothpaste making. I will agree to find the student group here that have expressed interest in this as part of their #48hoursplasticfree campaign, and encourage them to join us in April. Oliver will show his new mini-computer box which he will have equipped as a mobile server.

Before leaving I will have a conversation with Nicke about proxy servers to work out a way in which a mobile databank could form the backbone of a website. (The issue concerns linking static and dynamic ip addresses, fact fans, so that the site never issues a 404 notice, even when it cannot find the database and data because they have gone offline so that someone can move their physical location.)