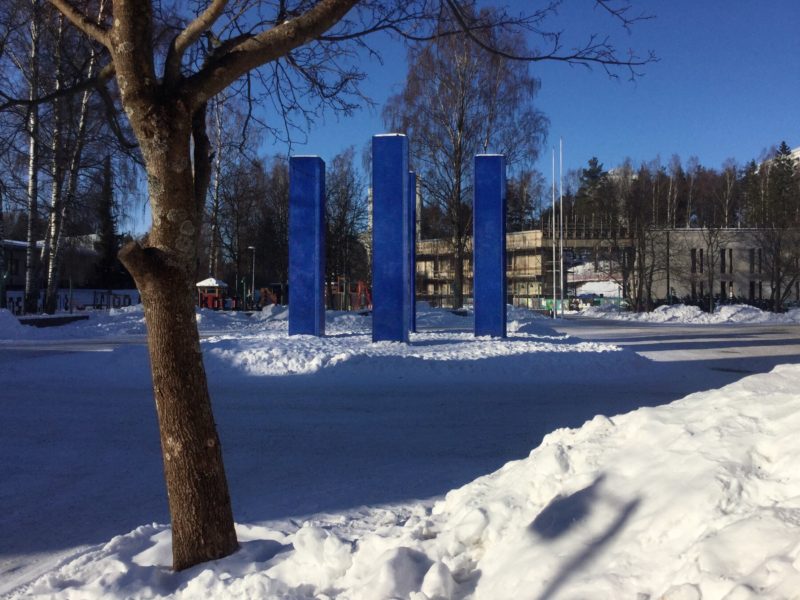 I woke up dreaming in Finnish which, as far as I know, constitutes a first. I woke up giving some sort of witness impact statement at some kind of hearing. The defendant had done something that had effectively destroyed or derailed my life. I woke up clearly looking straight at him and saying “Sina olet nolla. Sinulle on nolla. Olet paska pikku poika.” Having switch the alarm off I lay in bed trying to work backwards to retrace the narrative, without much success.

The thermometer on the outside of the takkahuone window clearly said minus 22. Irma made me wear two scarves in a particularly Finnish manner; one inside my jacket and one outside the jacket once I had pulled the hood over my head. I also had a hat under my hood. Once I stepped outside this arrangement all made sense. I walked to the bus stop in the freezing cold wind without feeling uncomfortable.

At Arcada I got two emails from AACE saying my paper and pecha kucha had received the thumbs up from the peer reviewers and I should therefore plan on going to Amsterdam in June. The third paper, the one I planned to coauthor with Christa, Hafdis and Vera, got a thumbs down, although we can still recast the abstract and submit it for the second call.

In the morning I made some final fixes to the Buddyschool website, which included replaceing every occurence of the IP address in the database with “buddyschool.fi”. I did this with my heart in my mouth because messing with the database can turn nasty. Sure enough, when I restarted it I got a sitewide error message. I went for a walk to get coffee and worked out possible issues, and when I got back I realised that the problem lay in my imagination. If I had had the imagination to retype the url in the address bar instead of reloading the page it would have worked perfectly.

We then had a fire drill during which I went shopping. In theory we should have trooped out of the building with only what we could grab, and stood in minus twenty until everyone had appeared and made themselves known. In practice I left five minutes before the drill and went to buy some cheese.

When I could safely return I had a Skype conversation with Jutta about the css examples I have built for the Structured Information course that starts later in the month. I then left for Stoa.

Pausing outside Stoa I take a photograph of the four blue pillars that constitute public art, and which I genuinely like. They glisten in the snow surprisingly brightly. Before the meeting I have time to return two cds to the library. I spot Isaac Hayes album Black Moses and take it out. I notice that it has an exact fold-out facsimile of the original album cover and cannot resist. I have spent some time recently listening to Hot Buttered Soul and this will make an excellent sequel. I used to have the album years ago.

The first meeting will involve Laura and Natalie, who have begun work on the Microwork branding project. They will report back and make three suggestions for renaming the project. Irma will get very excited about one of their suggestions. I will wonder why and then later come to see what she sees in it.

The second meeting will begin the #makesomenoise branding project. Irma and Sami will meet Jessica and Jolanda for the first time. This project should prove slightly simpler than the other two, since the team have already finalised the name and identified clearly understood target groups for the branding.

Irma and I will pause at Prisma for some milk on the way home and then huddle in the warmth. Sunshine will stay indoors as much as he can.

Minna will come round with a candle for Irma’s father and stay for a chat that encompasses cycling and the plants she has managed to start growing in her indoor greenhouse.