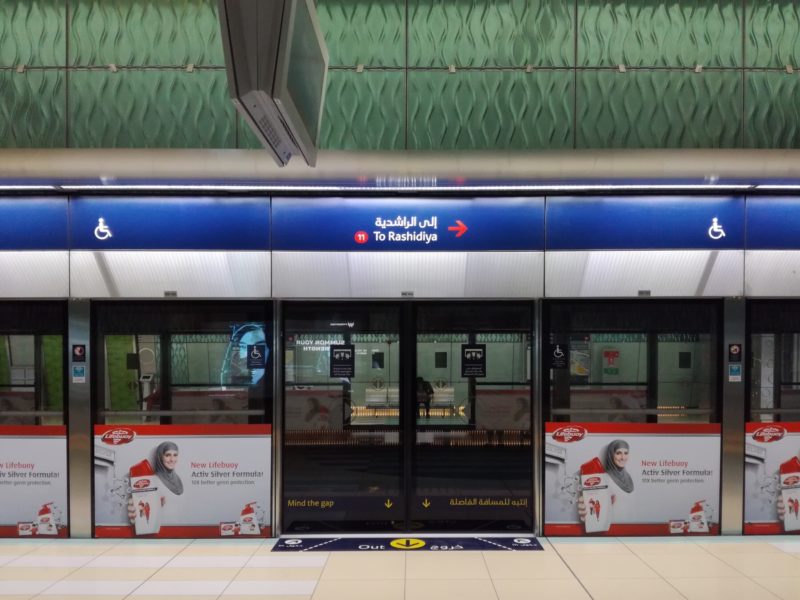 Sometime in the middle of the night Irma became convinced that she had the wrong pillow and a bout of pillow swapping ensued. Despite this we woke up early, feeling fresh.

Home breakfast led directly into an hour or so at the pool. I picked up one of the two available copies of Men’s Health available to read poolside and read while I cooked. I found it a lot more interesting than I expected.

Booking a trip for tomorrow took longer than we expected. We could not decide if the young woman dealing with us had a cunning way of feigning ignorance to raise the price of the deal she tried to offer us (which changed shape every time she mentioned it), or whether she represented a living example of someone promoted well beyond their abilities.

When we had finally got irritated and given up, we went shopping to restock our supplies. Food in fridge, we left the hotel again and took the metro to Deira City Central. Today we prepared ourselves to swap from the green to the red line.

We change at Union station, and I pause to take a photograph. The stations have glass walls and doors preventing anyone falling or jumping onto the tracks. The automatic trains line up the doors exactly as they stop and both sets of doors open at once.

Today Irma uses the women’s carriage again and stands one side of the dividing line while I stand on the other. We saw local couples doing this yesterday.

We go to Deira City Central and walk to Deira City Mall. We will wander around and Irma will buy some clothes. As we begin to leave we will realise that we have visited here before. We came here and ate in the food court the first evening we ever spent in Dubai, three or so years ago. Once we recognise this, we will suddenly know our way around. I will walk directly to Borders and not buy a book, before we go straight to the metro.

I will however purchase a copy of What’s On, which comes with two freebies: another travel magazine and a paperback guide to brunch in Dubai. I take the latter as proof of my hypothesis that social life in Dubai centres on eating and drinking.

When we get back to the hotel the young woman trying to assume the identity of a travel agent will frantically beckon us, and offer us exactly the deal she refused to offer us this morning, at the exact price she said she couldn’t do, even if she could offer us the deal, which she couldn’t. We will take it before our realities diverge again.

We will eat at the buffet once more, where I will discover the name of the desert I like so much: buko pandan. I will have several portions.