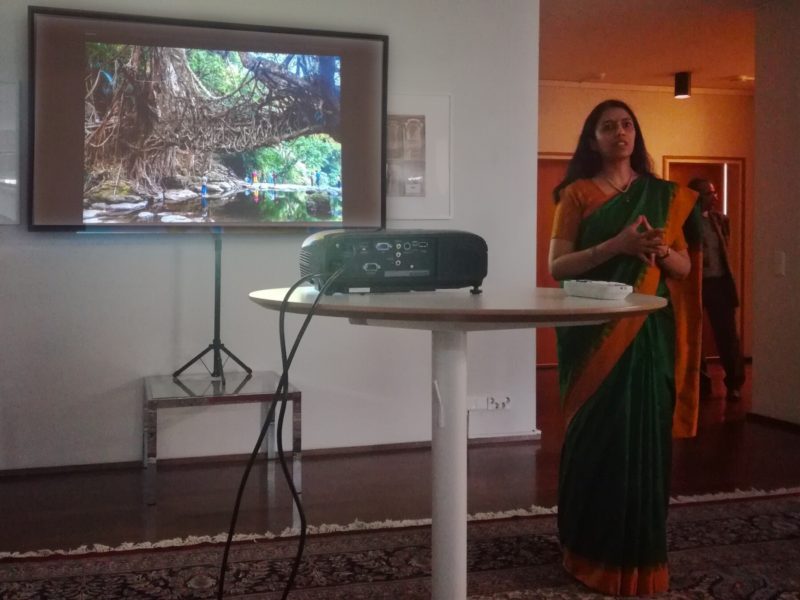 The weather had got even colder and I could feel something between damp air and drizzle when I left the house. This time I had taken gloves with me, and the cycle ride to Puotila took less time than yesterday.

I got to work to have a conversation with Nathalie about the new project at Arcada to export our education abroad. Someone from Edunation in India will arrive on May 7, and I will have prepared material to show him. I agreed with Nathalie that I would much prefer to teach in India than Pakistan or central Africa, assuming that anyone ever wants me to teach anywhere.

At 9:15 I began the penultimate session of the Structuring Information course. Today we finished off the carousels and then moved quickly onto using the canvas. The group have worked so well that I wanted to throw in one last topic, especially since I have not had the time I have wanted to explore the canvas. I explained honestly that I needed to explore this area as well, and we then embarked upon group exploration.

As usual they got a lot done.

When the class ended I phoned Irma’s mother who had had another water emergency yesterday evening. She said that the water had stopped, that Arto had cleared up the initial mess, that the housing company had sent people to assess the damage, and the the insurance people will come tomorrow. I then sent birthday greetings to Luke who became 38 today.

At 13:15, after a twenty minute break, I started the first session of the Interactive Storytelling course. We looked at the basic constituents of a story, and asked ourselves the difference between a description and a story. I took them through Joseph Campbell’s 23 stages in the Hero’s Journey. They went off to write the simplest genuine story that they could., after which we listened to them all. Finally I introduced them to the ideas of John Truby, and we discussed how they applied to different movies they could remember.

All this took time and we finished just before 17:00. I left them with the idea that much of the rest of the course will take place online. They divided into groups and agreed to stand by for an email at the start of each week containing instructions for that week’s mission.

By 17:50 I had arrived in Kulosaari and Irma had joined me.

We sit in a room at the Indian Embassy listening to the ambassador, Ms Vani Rao, introducing the first session in a series of talks called India Perspectives. She stands to one side of the technology that will bring us images of India. At the moment we can see one of Tim Bird’s slides showing a living root bridge in the state of Meghalaya in the very north east of India.

Tim Bird will offer a rambling chat through a motley assortment of slides, leaving me with the impression of an elderly uncle showing off his holiday snaps. I will find myself longing for structure. Later I will learn that Tim Bird works as a “freelance writer and award winning travel photographer” and my face will assume a look somewhere between surprise and shock.

The second speaker, Tommi Niemínen, worked in Delhi as the Asian correspondent for Helsingin Sanomat, and he will have slides taken by the photographer he worked with. These will look as though they might win some awards. His talk will have a clear structure. He will begin by telling us the three points he wants to address and then he will address them. We will disagree with some of his opinions, and we will find his prognosis too gloomy (Finnishly gloomy, Irma will say). He will, however, prove an interesting speaker.

Irma will take part in the discussion afterwards and we will hang around exchanging cards with some Indian entrepreneurs at the end.

When we get home I will chat with Naa and Irma will talk with her mother. We will settle down, and I will start to get ready for bed, when we will get our own Indian news. Arjan will message to say that Bruno died this morning after a truck hit him on the highway.

We will both feel genuinely sad. I will fall asleep thinking about him.