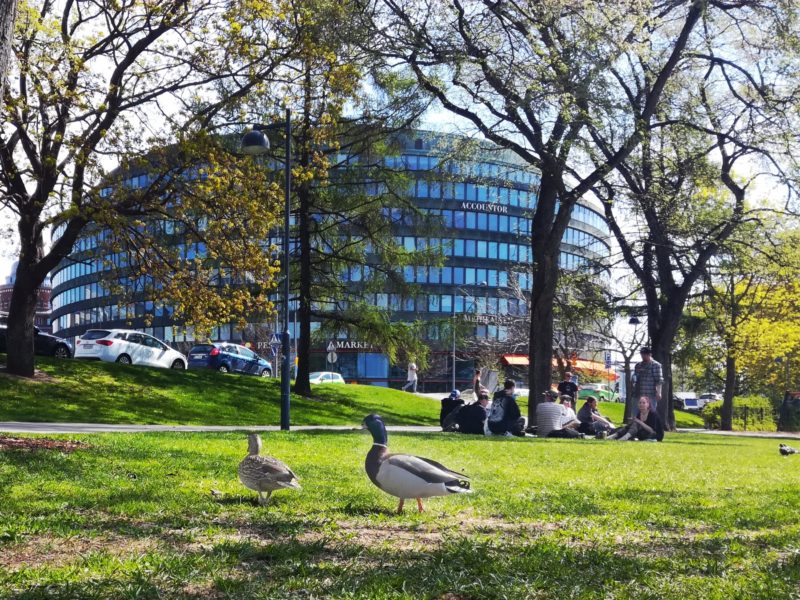 I woke up as normal, wash and sat down to breakfast. I found a note in my cereal bowl asking me to wake Irma if necessary. Before I left I could hear her still sleeping and so I went in to wake her. We said goodbye and I wished her luck.

The temperature had risen again and, for the first time this year, I cycled to Puotila in shorts and t-shirt, with no cardigan.

At Arcada I fixed some text on the Job’d and MakeSomeNoise sites. Having seen them online, and having had a chance to read through them, Irma had realised that some details needed adding and some texts needed amendment. I told Jolanda and she fixed hers. I fixed the Job’d site myself; and when I did I found myself extremely impressed by the logical and tidy nature of Natalie’s coding.

Jutta and I had a chat about the entrance examinations later in the week and then I left for Kuusi Palaa for a Convivial Mechanics meeting. I arrived first and then Aga, Ilpo and Oliver joined. Since the weather had become positively tropical we decided to move outside to meet in the sun.

We walk up the hill and turn left at Porthaninkatu, across Toinen linja, down Pothaninrinne to the grass between the sea and Eläintarhantie. Down by the sea little groups have already gathered to drink themselves into the afternoon. A police van drives down the path checking that nobody has got too drunk yet. I watch a policewoman talking to two old men on a bench, both of whom have bags at their feet bulging with cans of beer or lonkero. Two ducks approach us curiously and don’t mind at all when I lie down and photograph them.

We will spend a couple of hours talking about the event we have planned for the end of September. We will talk about speakers, venues and possible audiences. We will all find common ground and agree to involve ourselves in the project. I will feel for the first time that we might actually make this thing work.

Afterwards Ilpo will have to leave for his studio and the rest of us will declare ourselves hunger. Aga will lead Oliver and me to a vegetarian Vietnamese restaurant called Sen Chay that I could never have found on my own. It lives in the inner courtyard of a massive building near Long Bridge and has outdoor seating on a walkway. We all order roast tofu soup which comes in enormous bowls with roast tofu that tastes and feels like chicken.

I will return to Arcada where Jolanda will show me the latest version of the MakeSomeNoise site. She has made major improvements to the site and I will tell her how impressed I feel. She will send me a zipped version and I will upload it so it becomes the public site.

On the way home I will stop at Alepa to buy a tub of the new Oatly double chocolate and fudge vegan ice cream. It will prove to be outrageously delicious.

At 17:00 I will begin a Skype call with Scott Cunningham that will, in the end, last three and a half hours. We will discuss a wide range of things, most but not all revolving around our planned Peircean project. During the course of this I will learn that, in the southern states of America, people made mulled Dr Pepper at Christmastime. They slow-cook Dr Pepper with cloves and spices and herbs, and then drink it warm. Scott will tell me that this counts as the most disgusting thing he has ever drunk; and he will tell me this while working his way through his morning bottle of Dr Pepper.

Late Sunshine will demonstrate how much he misses Irma by refusing to settle down at bedtime and wandering the house howling.