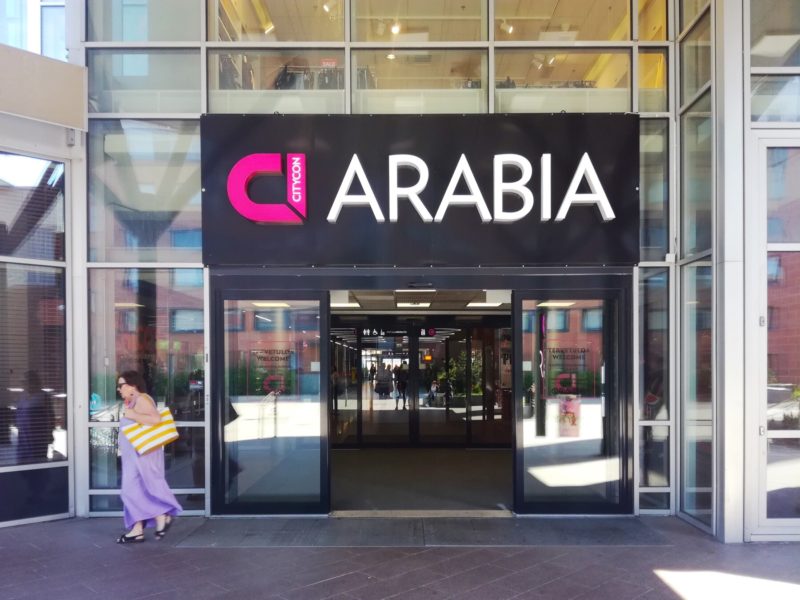 This morning, on the second day of Irma’s raw vegan challenge, the milk finished and I switched to the carton of oat-milk that I had bought on Sunday. It looked very thin – like water dipped in oats, in fact – but it worked well enough on my Weetabix. Irma said that it had not worked at all in her coffee, which caused me to reflect out loud that coffee did not count as raw food. Irma said that she could not start the day without coffee, but after a coffee she could spend the rest of the day eating only raw food.

I cycled to work and walked from Kalasatama again. The walk has turned back into something pleasant after last year’s non-stop road works. Half way down by the gas station I saw a set of main roads that have no buildings either side of them yet. It reminded me of a Scalextric track that I might have put together at the age of eleven.

I arrived to a controversy about the Arcada blogs to which we currently contribute nothing, and joined Nathalie for a quick strategy meeting. I then finished my preparations for the final Session of Interactive Storytelling.

The session took place from 10:15 to 12:40 when I had explained everything I wanted to and lunch called the students away. We went right through the main points of the course and I explained the final group exercise that they need to complete before June 8. They have to use Twine to build a full storyboard for an interactive story; and that story has to follow the guidelines laid out by John Truby.

After a morning teaching I decide to go for a walk. I walk over to the mall and notice the doors for some reason to do with the light and shadow at the moment I stand there. I photograph them after somebody has walked out and before they begin to close again.

At 16:00 I will leave Arcada, planning to read some more at home.

Earlier in the afternoon Naa had sent me a WhatsApp message asking if we could have coffee in Itis. I will answer “yes”, but the result will turn into ice cream as Espresso House will prove too busy for us in the time available. We will sit and chat and eat our different flavours and then Naa will walk with me to Stockmann where I plan to walk through to the ring road, cross it and walk to Puotila to pick up my bike. Just as we say goodbye Naa’s classmate Tuulikki will appear from nowhere and I will finally meet her for thirty seconds. The three of us will become covered in confusion, burst into laughter, and I will wave and leave.

I will arrive home minutes before Irma. We will do things in the garden and then spend the evening eating vegan ice cream. The Oatly Double Chocolate and Fudge will prove, in Irma’s words, “least bad”.