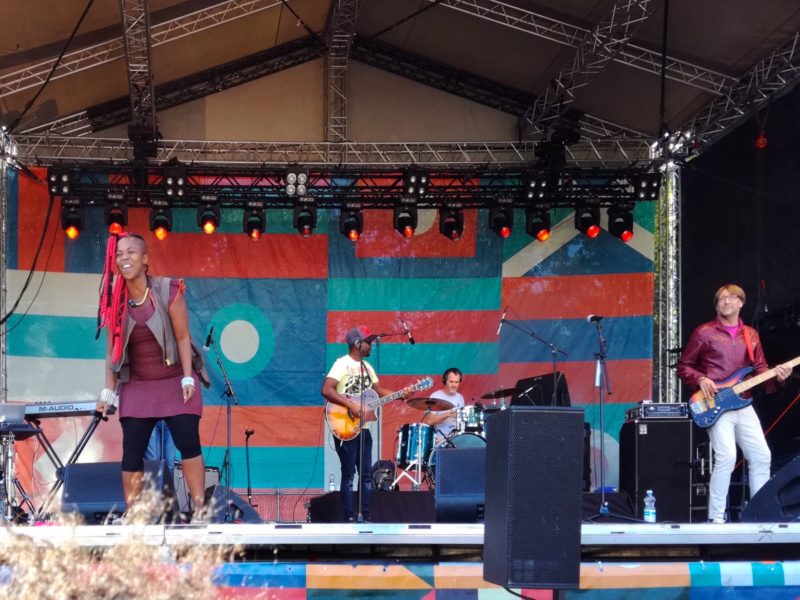 We got up early and Irma left home sometime before 9:30 to spend the day working in the Helsinki City tent at World Village, or Maailma kylässä to give it its proper title.

I spent the morning doing the Saturday cleaning, which takes longer in the summer when the doors stay open and Sunshine brings leaves and grass in with him every time he comes and goes. I also cleaned the shower room floor with some of the baking soda that I had left after yesterday’s adventures with toothpaste.

At 13:00 I cycled to Puotila and took the metro to Kaisaniemi where I walked down to Rautatientori to see Irma in her tent. I watched the Henna Girls in full swing and talked with Sami, who had outfitted himself in a full set of Job’d merchandise.

By 14:00 I had walked to the Savannah stage in the park where I watched Jupiter & Okwess, a Congolese band who had more than enough energy to fill the whole park. I had intended to take a peek and then move round the site, but I found myself unable to leave. Towards the end I noticed that the drummer wore a lucha libre style red mask that covered his entire head. He never took it off, even when the band left the stage and then returned for an encore.

After this I got a falafel and avocado wrap from the Levant food truck and liked it a lot. I walked around and then decided to get out of the sun and away from the crowds by visiting the Academic Bookshop, ten minutes walk away. I wandered around there and then headed back to Irma’s tent where I met Kipa, as lively and amusing as usual.

At 18:00 I return to the Savannah stage in time to see the start of the performance by Freshlyground, a band from South Africa and Zimbabwe. Solani Mahola, the singer and main writer, has a completely charismatic manner, and owns the stage within seconds of walking on. The band themselves move and play in a much stiffer manner than Jupiter & Okwess and the music seems more like western pop/rock than they did. Nonetheless they have everyone up and jumping and the more they play the more it becomes clear that they have a huge arsenal of instantly catchy tunes with interesting lyrics.

I will leave before the crowds and get a half empty metro back to Puotila. When I get home I will find Irma and Sunshine waiting in the garden. We will sit in the still-hot evening sun drinking cold cider until dusk begins to arrive and all three of us go indoors.