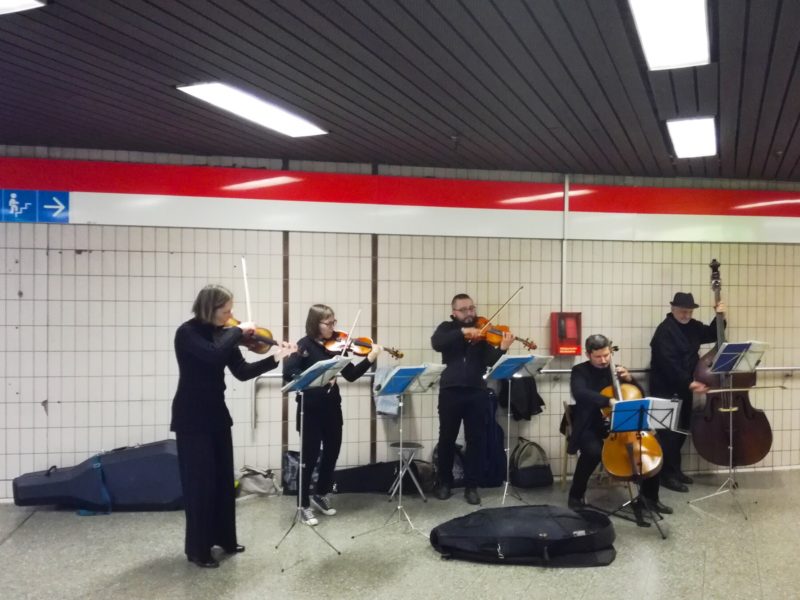 I put a thick cardigan on this morning and felt glad that I had as I cycled to Puotila in a cold wind underneath a grey sky. I had an uncomfortable amount of things to do today.

I pause as I walk along the tunnel out of Sörnäinen metro. The Russian string quartet have begun playing, except this time I can count five of them. I wonder whether two of them double parts or whether they have a library of music for string quintets. I think that I have wondered this once before when I spotted them with an extra player.

I will begin my uncomfortable amount of things with an email from Riga, asking me to modify my paper from a conference in September 2016. I had long ago assumed that they had decided not to publish it. I will especially like the fact that I have two weeks to respond with the requested additions and amendments, since they have a tight deadline. I notice that at one stage in the comments they ask me to shorten the piece, and later on they ask me to add a new section grounding the paper in theories of embodied consciousness. I will write asking for clarification.

I will then turn my attention to the joint paper that somebody has to write for Edmedia. This will take the form of a poster/demo, for reasons I have never understood. Either I pressed the wrong button when I submitted it, or the error occurred at the receiving end. Nonetheless we have decided to submit a paper to accompany the demo, because we want publishing credits, and we want the paper to act as an initial draft of a book chapter.

In the middle of last night I woke from a dream with a great idea, remembered it, and fell immediately back to sleep. Amazingly I still remembered it in the morning, and still thought it a great idea. I will email the others about it to ask their opinion.

Irma will phone to tell me that she strongly believes that some of her emails to me have gone astray. She lists some she had sent and, sure enough, I have not received them. I will promise to see Harald in the afternoon.

I will then have an abortive lunchtime meeting that involves going to Sörnäinen for no reason at all, waiting around, and coming back. During this process I will drink a cup of cappuccino from a nondescript cafe that I hope I need never go back to. I will then speak with Vishnu, who will ask where she could find my thesis, since she has a deep interest in questions of consciousness. I will add a link to dibdibdob.

I will ask Nathalie if she would like to take her MA students on an outing to the Patterns of Decentralised Organisation conference in September, and she will immediately say yes. I will talk with Mats about a major problem we might both have tomorrow morning.

I will then walk down to the basement to ask Harald about the email issue, and he will lecture me about coming into the IT room when I should send a support ticket. Nonetheless he will check my email account and confirm that nothing has arrived from Irma in the time frame I specified. As I expected he will suggest that the problem lies with Helsinki’s servers, or somewhere between there and Arcada. I will leave with my tail between my legs.

At 16:00 I will leave to go bowling with Naa. When we get there we will discover that the place has closedfor a staff training day. We will go to Forum instead and have a leisurely drink at Espresso House.

Neither of us will have espresso.