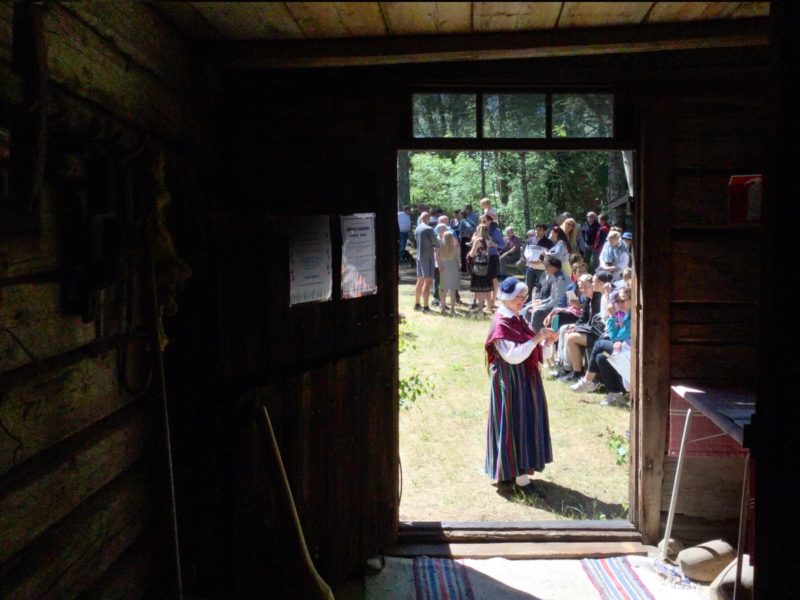 After last night’s early-to-bed we unsurprisingly woke up early this morning. Irma claimed that Tirmo bar had had a band on but I never heard a thing, so if they did they must have played more quietly than in previous years.

The wind had died down but so had the temperature and so we ate breakfast indoors. Afterwards Irma did the mowing while I weeded.

At 13:00 we set off to see the traditional midsummer dancing in front of the village museum. Before the dancing starts we go and look inside the museum where we meet Eva Kyrklund. I look out through the door-frame and see Ann-Maj standing in her costume, playing with her mobile phone.

We meet Marina and Liisa and I make them laugh by pointing out that the dancers seem to get slower each year, and this year they have finally arrived at the point where they walk through the dances.

After we have watched enough we drive to Söderby to see the little shop that Erika’s daughters run, and to look at the new guesthouse. We remembered correctly: it has no windows at all.

When we walk down to see Erika in the shop she will tell us that two Scottish women stayed there last night and absolutely loved it. They have come to see Moomin Island and they felt it set the atmosphere perfectly. They have booked another night for their return journey.

In the shop we found Village Tea, an enterprising new drink from Koskenkorva, with a fantastically designed retro label on a proper old fashioned bottle. The drink contains some viina, some Earl Grey tea, fresh lemon, and herbs. Later we will sit in our new garden chairs and decide that it tastes very nice.

The temperature will drop further until it feels like late September. We will go indoors and eat fried new potatoes and gravad lax.

We will spend the evening in the kitchen.