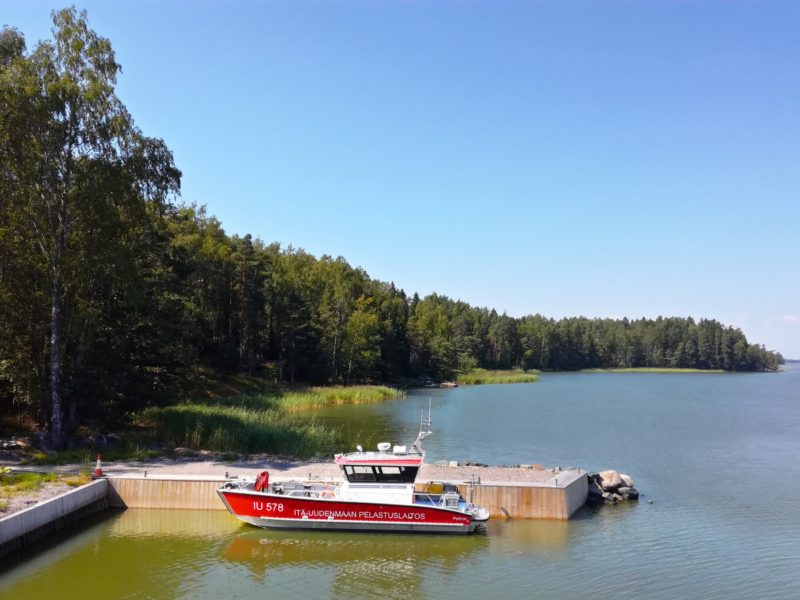 In the heat we woke up at 9:15 and staggered, sweating, out of bed. Today promised to get even hotter than yesterday.

I did some weeding while Irma washed up and managed to grasp bunches of stinging nettles with both hands. I wore gloves bu came to realise that their effectiveness has limitations. I stuck my hands in a bucket of cold water.

I decide to cycle along the road and over the three bridges to Lilla Pellinge. When I arrive I decide to photograph the fire boat that the volunteer fire brigade use.

I will return to sit and read. I start a book that Irma’s mother gave me because she did not like it at all: I See You, the second novel by Clare Mackintosh. Three chapters in and I will begin to suspect that I understand why. The first chapter has a first person narrative by the woman who presumably acts as the main protagonist. The second chapter has a third person narrative, in the past tense, by a second protagonist. The third chapter has a set of disembodied thoughts in italic. The next few chapters return to the first person, present tense, voice of the protagonist from Chapter 1.

The switching of tense proves merely a stylistic device. Both protagonists get introduced to each other somewhere around Chapter 6, and both sets of events prove contemporaneous. I suspect that Leena didn’t like it because she regarded the writing as clumsy; an opinion with which I would agree.

After brunch I will walk down to the sea and discover that the algae has left the bay completely. I will hurry back to tell Irma and within minutes the world will see Irma swimming. Trulle will play the part of the world today as he wanders down to the jetty to watch her in the water.

I will continue reading, pausing to discuss the hubris of Elon Musk, who insisted that he would rescue the Thai football team from the cave with his rapidly built submarine and became furious when one of the rescuers dismissed the attempt as a publicity stunt. His fury took the form of a set of tweets accusing the diver, who had formed a central part of the whole rescue operation, of “being a pedo”, on the grounds that he came from Britain and lived in Thailand.

Irma will go swimming again in the late afternoon and at 20:00 I will join in the hay work alongside Mika, Camilla, Hanna, Mika’s cousin, Gita, and Hanna’s younger daughter who will stand on the trailer and throw the bales down to the ground for us to stack in the barn.

After this everyone will go swimming; me too. Irma and I will join Gita and both Hanna’s daughters, and as we leave Mika and Camilla will arrive in swimsuits.