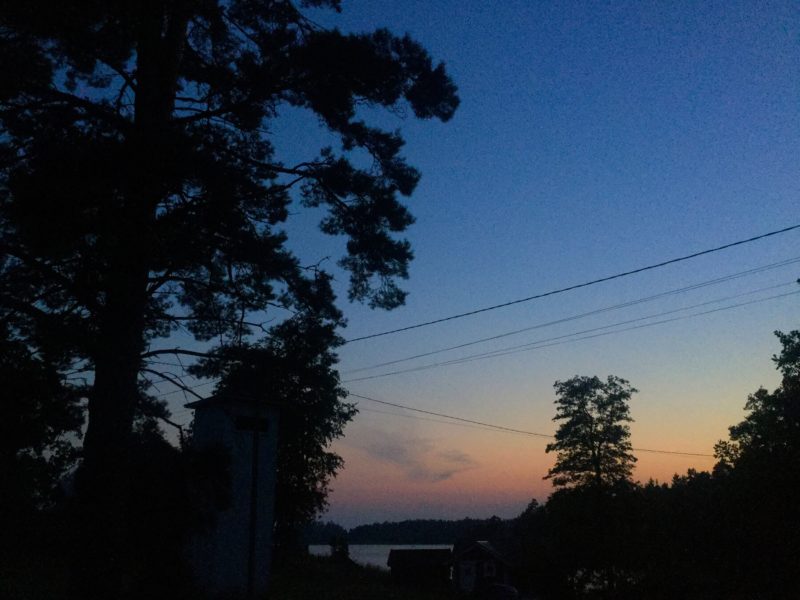 This morning Irma remembered that she had a pipette in the car which had never been unwrapped and so she went and got it and then gave Sunshine two pipettes full of water. This proved much more successful than trying to spoon water into his mouth. He swallowed all the water and he didn’t seem to have much objection to the process.

The cloud and wind continued, and then at about 12:30 Irma left for Helsinki. We had packed the car with things to take back, including some fresh sunflowers for her mother, and some fresh berries for the freezer, and off she went.

In the afternoon the clouds began to clear although the wind continued. By 16:00 I found myself sweating as I sat in the garden trying to read. I found myself doing very little, and struggling to do that.

At 17:30 Irma phoned and asked me to bring Sunshine in and make it drink. However, it had already come in of its own accord ten minutes earlier, and had eaten and drunk. I closed the door and it didn’t argue. I looked round and he was on the bed, lying down and getting ready to sleep.

I alternated between indoors and outdoors and reading and not reading; then finally heated up the cauliflower cheese that Irma had left for me and sat at the kitchen table enjoying it.

I get ready for bed, look around as I walk back from the sauna house, and decide to take a photograph of dusk over the bay. The Swiss people staying in the little house make me wary of racing down to the jetty, so I take some long shots of the trees. This works out in its own way. Of course, having decided to do this, the sky reacts by refusing to turn the kind of deep red it has turned on previous nights.

I get tired of waiting, go back to the house, climb into bed, and fall promptly asleep.