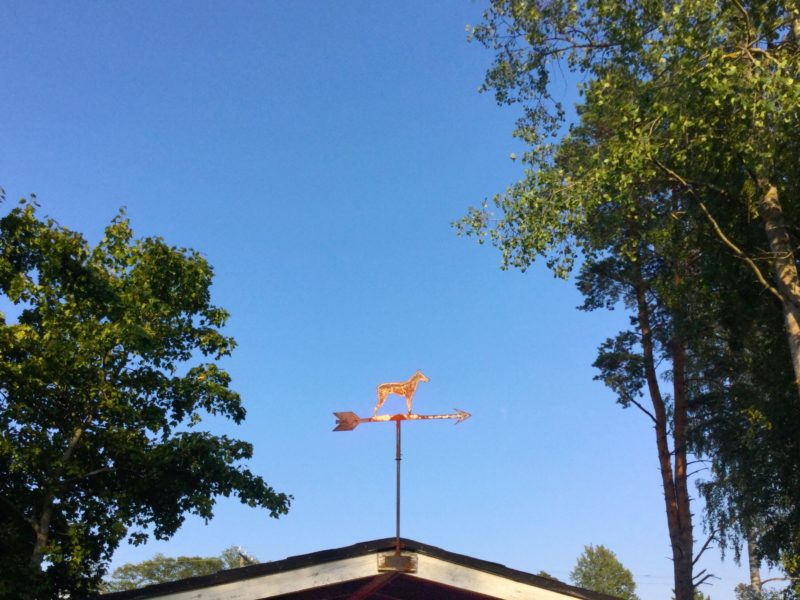 I started the day with a visit to Tero the Dentist, in his latest premises just outside Itis. I waited as usual until the time of the appointment seemed more or less arbitrary. Tero then repaired two fillings in less than ten minutes, and I left at more or less the time I had expected to leave.

I stopped at the newly renovated Lidl in Sörnäinen on the way to Arcada which now looks like all the other new Lidls: modern and not very down market at all, honest.

I spent the morning and the first part of the afternoon finishing the lengthy process of grading the summer course. By the end I knew a lot more about creating formulae in Excel than I did when I woke up.

I followed this by writing a draft agenda for the final Nobanet meeting in Estonia next month and sent it to Eija. Then I raced home, listening to Pete Wylie and the Mighty Wah! on the way.

We wander around the garden doing arbitrary tasks. I notice the weather vane on the sauna house, strangely lit by the low bright sun. It stands out against the clear blue sky.

Soon we will sit on the chairs on the terrace sipping cider. We have reached a perfect moment of warm sun and no mosquitoes.

We will have a happy evening which we will prolong until early morning.