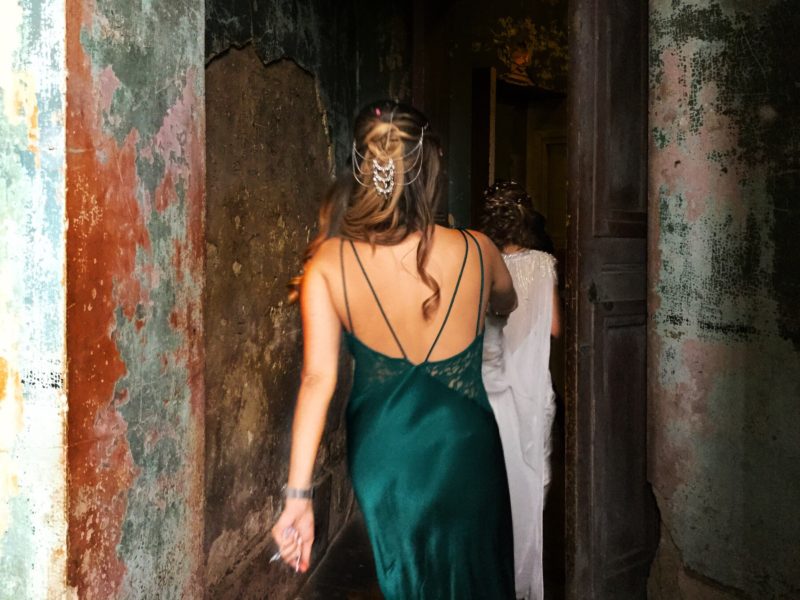 We managed to sleep in our just-about-double bed and woke up about 8:30. We went downstairs for breakfast where I poured Oatly “milk” over my muesli. Trendy or what?

After breakfast we spoke to the woman on reception and changed room: from 3 to 8. Three faced the street and could have counted as either a small room or a large cupboard. Number 8 felt like an actual room, and faced inward so our window looked down on the breakfast area.

We left the building at 11:40 and walked straight into the rain. We walked for ten minutes under our umbrellas to Asylum Chapel, a bombed out church that has a new roof but remains in a deliberately distressed state.

Alice arrived fashionably minutes late for the ceremony which gave us plenty of time to look round the building and greet people. We met Jack, Denise, Casey and Oheema. The children entertained us, both in non-stop motion.

We met Sue, her brother Peter and his wife Sue; Mona, Ajay and Seema; Jane Donaldson with Evelyn and Holiday; several of Luke’s friends; Karen Symes with Ned; and people who I recognised without necessarily knowing.

At the end of the ceremony we stand outside in the drizzle drinking sparkling wine. I catch Alice and her chief bridesmaid, Amily, racing back into the dry so they can make another entrance in a few minutes time.

We will spend most of the day with Mark and Eileen. We will get onto the first hired bus to Islington well before anyone else in order to get the front seats downstairs. The rest of downstairs will fill up with Alice’s family.

The two buses will take about an hour to reach Islington Metal Works, another barely converted, lovingly distressed venue. I will have to take part in a short tea ceremony which Alice’s aunt will lead with a spirit somewhere between Bruce Forsyth and a comedy drill sergeant. Suitably made fun of, I will leave the stage and return to the crowd.

Luke has taken an enormous amount of detailed care with the place arrangements. In addition to the printed menus and timetables everyone will have a unique handwritten postcard. Jack will give an absolutely merciless and hilarious speech, which will thank Alice for singlehandedly arranging the wedding while Luke fiddled around with Photoshop. He will have me (and most of the people there) crying with laughter.

Tonight we will avoid local bars and go straight to bed.