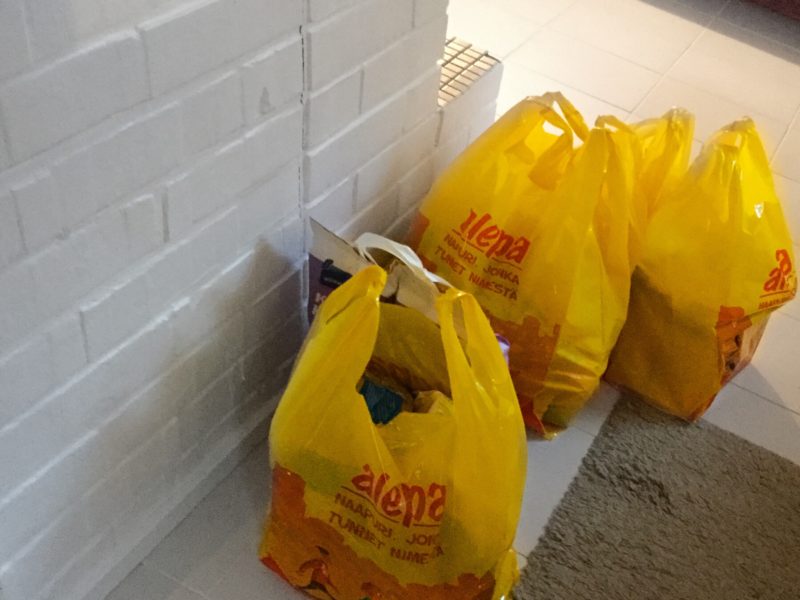 Yesterday evening I received the best email I have had for a long time. I had written to my bank asking why a bank charge of 7€ had mysteriously appeared on my account this month. They explained that the charge had occurred because

the MobilePlus-package … requires a Nordea card (Gold, Credit, Debit, Electron), and you have a Finnair MasterCard. You already have all the other necessities of getting the MobilePlus-pricing. Therefore I recommend that you order a new card from your netbank by choosing Cards -> Card applications. This costs you nothing and does not affect your Finnair card. Nordea recommends that every customer has at least a one spare card…

If you do not wish to get a Nordea-card as a second card, you will remain in a product-based pricing and the fees will be automatically subtracted from the next month onwards.

I read this as meaning that Nordea wish to start charging me for not having enough credit cards, and that, if I agree to order another (unnecessary one) they will charge me less than if I don’t. I therefore started the morning by trying to get a new credit card. This took slightly longer than I expected because the form had some ambiguities which I fell into at every opportunity.

At midday Sophie began a Zoom call which we had intended to use to record the first two or three episodes of the podcast. My cold/flu prevented that because I could hardly speak for more than a minute without coughing. Instead we did more planning, and agreed (among other things) that we will make the podcasts audio-only. This makes them easier to record and also means that we don’t have to apply makeup and brush our hair before recording.

At 13:00 Nick joined Sophie and I and we spent an hour discussing how we will run the workshop on Saturday at the festival. By 14:00 we not only had a plan, we had several.

I then spent the afternoon rewriting the CMS session that will take place tomorrow afternoon. Jutta and several others have pointed out that I cannot possibly lecture, and I completely agreed. On the other hand, I didn’t want to cancel the second session and then have to fight to recapture the students’ interest.

I gamified the session, moving it from a guided tour through Wordpress.com to an assignment in which students got challenged to teach themselves about Wordpress.com, using a series of links and explanations that I added to Its Learning.

By the time I left for home I decided that I should have done this in the first place. As a lesson it seems a lot more interesting than following along with me.

I get home to discover that we should expect an Alepa home delivery sometime soon. I wait eagerly because I really like the little red and yellow vans they use for this. They make home delivery seem like a service that only gets offered in Toytown.

Sadly, when the delivery man arrives, he comes in a big maroon van. I photograph the carrier bags he has delivered while Irma questions him about this. He claims that the services has proved so popular that the little vans could not keep up with the demand.

Humph, I will exclaim later. At the very least, they could have painted the big vans in the same Tonka Toy red and yellow design. I will suspect that the real answer revolves around sub-contracting. They now rent drivers and vans, both of which come in many sizes and colours.

We will unpack the bags and, for some reason, find the whole procedure amusing.