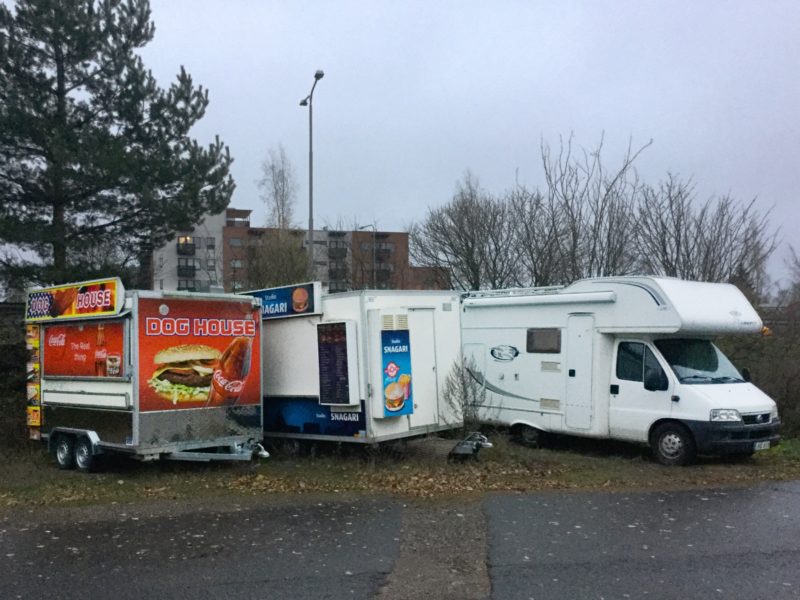 The morning felt cold but I still could not bring myself to feel that winter had arrived and I should queue for a bus. I set out to walk to Puotila.

Before I reach the metro I pass the caravan shop that has taken root in a deserted piece of the woods next to the station. Allegedly temporary, it has become a local fixture over the last four or five years. I stop to photograph two of the three hamburger stands for sale there. They have stood there for several years, as indeed have most of the caravans. Fast moving trade? I don’t think so.

I will get to Arcada and spend most of the day working on the Wordpress-based site for miaaw.net, which will launch when we publish Episode 3 of the podcast on Friday November 9. I realised a couple of days ago that I could build it in such a way that it became a perfect show-and-tell demonstration for the CMS course next Tuesday.

I will finish off the teaching part of the course by taking them through the three stage development process. Firstly I will show them the initial site, which I threw together for Episode 1 when we needed to store it somewhere. The only real design decisions involved using a typewriter-like, monospaced font, and a vow to keep the design minimalist.

Secondly I will show them the static site I will build today as a prototype. I will use a twelve column grid from responsivegridsystem.com with no space at all between the columns. I will then remove all the margins and padding from all the elements in my html, and create my own vertical spacers to make a grid that has cells of fixed horizontal and vertical measurements. I will build these using rems based on a 16px font-size in the html root element, so that I can alter the size of every element in one go by changing the html font-size in a couple of media-queries.

This site will host podcasts and the students in CMS will make a site hosting student movies as their final project. What I do will therefore have direct bearing on what they need to do. They too will need to take their static site (built in Foundation) and designed with lots of media embedded in it, and “wordpressify” it.

I will interrupt all this at one point to talk with Leila about the material for the film sites that the students will produce. She will explain that she only has four movies prepared with cast lists, synopses, publicity stills, and so on. Four? I gasp. I will watch the last few weeks of the course disappearing in front of my eyes.

I will abandon my site-building to go and sit and think, and then talk with Jutta. I will then return to the static site for miaaw.net and feel glad that I have two purposes for this project. If I didn’t have a reason outside the course to complete it then I would probably give up right now.

I will more or less complete the static site in time to race out of the door and catch a tram. I have promised to go for coffee with Irma’s mother in order to take in her large wicker balcony chair and move it downstairs into the cellar for winter.

I will get to Sörnäinen to discover that the metros have all stopped for an indeterminate period due to “technical issues” at Kulosaari. Security guards will prevent people entering the station and eventually those of us on the platform will find ourselves ushered upstairs and out of the station.

I will notice that the tram stop has more people than space. I will phone Leena and explain and promise to go tomorrow. I will then walk to Junatie to get the 58 to Itäkeskus.

I will get the third 58 because the bus stop also has a lot more people than space. It will take one bus load before I can even get round the corner and onto the pavement somewhere near the stop.

When I get to Itis I will decide to walk home, and I will.