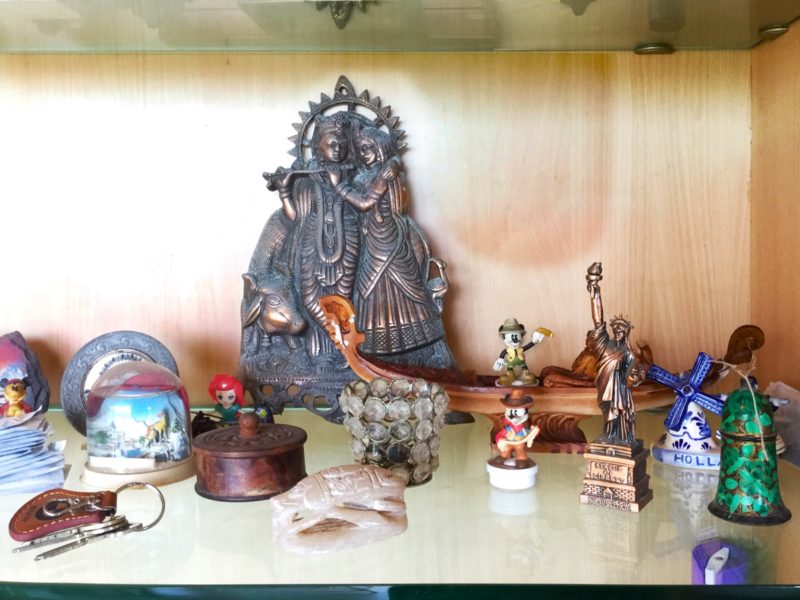 We had a six hour flight and so we arrived in Dubai at 2:40 head time and somewhat later there.

We went through immigration. We then collected our luggage, took it through security, and went back through emigration.

We bought a preposterous amount of alcohol at Duty Free as gifts. We then sat in the airport for five hours. The other two slept. I stood guard over our hand luggage.

The IndiGo plane ride passed in attempted sleep. I ate nothing, drank nothing except several glasses of water, and tried to trick my body into feeling comfortable in the limited space available.

Vincent collected us at the airport. I recognised him at the same time as he recognised me.

We got to the house where Anib met us. He had fallen ill in January, and looked frail and thin. He insisted that he had begun a full recovery and we laughed and joked.

After Vincent drives him home I notice the rearranged book shelf. The books have gone, replaced by a mixture of traditional Hindu decorations and Disney characters. Mickey Mouse stands in the boat in Alpine gear while an ancient Indian couple canoodle.

Night will fall rapidly. Irma and I will sit on the terrace and have a beer from the fridge, before climbing the stairs and falling asleep for twelve hours.