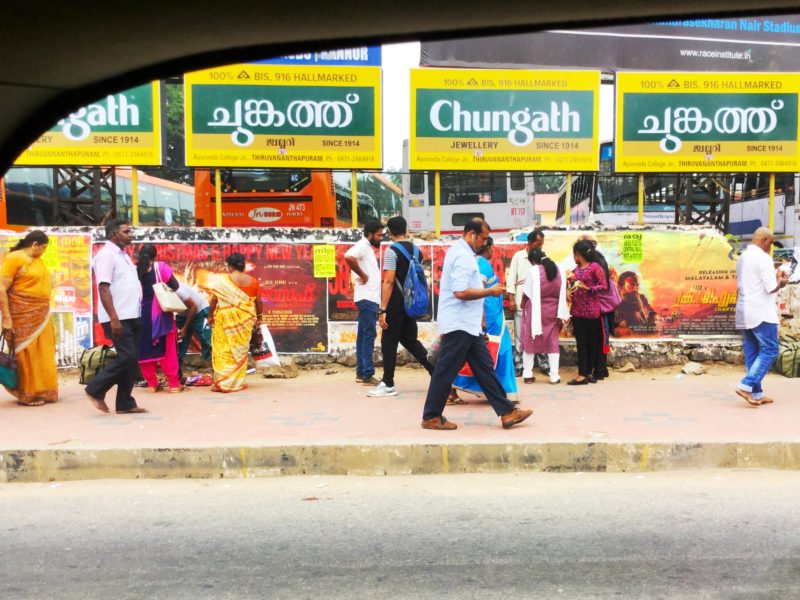 No newspaper arrived this morning. Given that they get thrown into the garden and I almost missed yesterday’s hiding in the bushes, I spent five minutes hunting it before I decided to accept its non-appearance as a fact.

Irma had phoned Uday to ask if he could take us to Trivandrum. He couldn’t but he sent his friend Papi instead.

He took us to the Modern Book Centre in his big air-conditioned people carrier, and Naa and I both found some interesting books.

After this we went to Big Bazaar where we had a minor spat, fuelled by the heat and humidity.

As we drive home I photograph people at the start of Milma Road, standing in front of assorted film posters. Some people call this the Old City Road, just to confuse things.

The original Muffin House stands here so we will stop and buy samosas and vegetable puffs, and a lot of other things except muffins.

Five minutes later we will pass the Milma Dairy from which the road gets one of its names.

At Kovalam Irma will leap out at Divine Supermarket and return with Odomos and more outdoor lights.

Our dinner will star various items from Muffin House, supported by fresh vegetable sticks and a range of Indian dips from Big Bazaar.